Good morning! Welcome to the Social Media blast for this auspicious crime noir - Agustín Martínez and his Village of the Lost Girls.

A new writer to me, Agustín Martínez was born in 1975 and studied Audiovisual Communications in Madrid.Today, he is one of Spain's most renowned screenwriters who has worked on some of the country's most popular crime series. On a holiday trip with his family to the Pyrenees he overheard the locals talking about the case of a missing child. The idea for Village of the Lost Girls, his first novel, was born and has been translated into many languages since. Now it's available in English translated by Frank Wynne, an award winning Irish literary translator who has translated a couple of Man Booker nominated titles in the past. 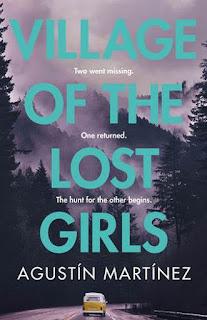 This is a page turner, one of the potential ’unputdownables’ of the year I should think. It’s a lost child story, of which there are many nowadays and many good ones.  There’s those where the missing child is never found  but the perp is and a whole story ensues, those where they are found and the story is how the perpetrator is discovered.There’s those where the child is found but their identity is in question and so on, other permutations around the same theme. So what do you do to make yours different? Well, what Agustin Martinez has done is to take two girls and lose them and then find just one. Clever? You bet. Then he offers an almost claustrophobic setting so the reader knows it just has to be one of the characters you’re engaging with closely in the story. But who?!?!

Set in an homogenous village, Monteperdido (translation - Lost Mountain), in Spain surrounded by beautiful mountains and countryside, it's a perfect location to lose anything if you felt so inclined. The return of a child lost some five years previously opens the, not so much a cold case as not as hot as it was case, bringing in police from beyond the village, Sara Campo and her older, detective partner Santiago Bain, 'I believe in God, not in man." he says at one point which makes for an interesting viewpoint from a policeman.

I found the start of the story slow and staccato but I think that was a case of adjusting to the style of translation. After a few pages I forgot all about it and became immersed in the book. As in the best contemporary crime noir offerings our police persons are as flawed as the rest of the villagers it seems! Sara has her demons to fight and the case consumes her. It's almost as if her police work allows her an avoidance technique to solve her issues. Interestingly the issues remain unsolved and I wonder whether there might be a room for a series of Sara Campo stories? Guess only Señor Martínez knows the answer to that. The book is almost as much about her as it is the lost girls. She is a complex character but drawn with faults aplenty but drawn so sympathetically that you can't help but warm to her and root for her to crack this case with a satisfactory outcome. Does she? Not saying. You'll have to subject me to torture if you want to wrestle a spoiler out of me. 😉 But it's an effective piece of police procedural writing that shows character development in all of the law enforcement personnel.

As with many stories of this genre it is tempting to offer spoilers simply to illustrate how good some parts of the book are yet that would be a disservice to potential readers of the book. To not do so is a challenge for a garrulous reviewer. Suffice to say the book begins with a short prologue and it's not a spoiler to say that this explains that the girls go missing. The main thrust of the book opens with a big event that results in one of the girls reappearing. Not a spoiler either as that fact appears on the cover. What follows from then on until almost the end is a tour de force of potential suspects and enough red herrings to open a fishmonger's. It's one of those books where you are absolutely convinced that you know who the villain is and then the case against them crumbles spectacularly and you move on to the next and so the pattern repeats. It's like a pendulum as new evidence is uncovered taking us back to previously rejected suspects. We, the reader, are absolutely convinced that we know who it is and start to become as dismissive of the police as some of the disgruntled villagers. Then we see how clever Sara and her colleagues are. But we are given plenty of clues - 'The most dangerous man is a solitary man, because even he does not know who he is. Because there is no one to tell him his story.' Tantalising maxim. Then you find that many of the characters are solitary.

As well as the twists and turn regarding the potential suspects and perpetrators there are a couple of completely unexpected events that shake you and you reread in disbelief. Bold moves indeed. Some considered and exacting plotting.

The characters are all pretty much well defined. There's quite a cast, you need to keep on top of them. But you believe in them and their foibles, there's few who you feel are merely functional. Even the weather becomes a character of sorts, never a suspect, never a victim, but a subtle impediment to proceedings. If I have any criticism it would be that the book is a little overlong and would have benefited from some waffle editing.

This book should delight aficionados of the genre.It's competent writing. Not surprising seeing that Agustín Martínez is a screen writer but this would translate well to the screen as perhaps a mini series for it is over long for a feature film I think. It has a similar plot style to those of Jed Mercurio's. It's a 'who didn't do it' more than a 'whodunnit' but it's a 'well dunnit'!

My thanks to Ella Patel at Quercus Books for a proof of this absorbing tale and for the opportunity to participate in the Social Media blast. Do check out my fellow bloggers and see what others think? 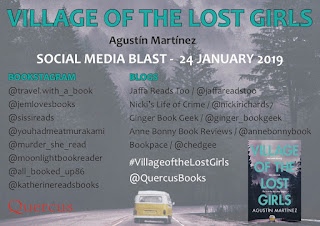