Today's blogpost kicks off with a book I loved, published in November 2013. One of those books of which you have few expectations but ends up delighting you for no good reason other than it does!! A moment of synchronicity maybe? 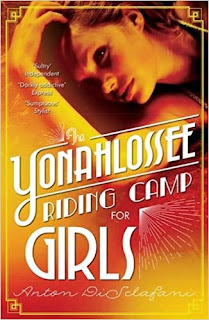 I absolutely loved this book. But don’t ask me why!! In many places it wasn’t well written; I read some sentences several times and they still didn’t make sense!  Maybe it’s the remaining child in me rising to the surface. I remember after reading Enid Blyton’s St. Clare’s series beseeching my parents to send me away to boarding school! But is this just a boarding school story? No. Some may say it’s a coming of age novel, others a love story but for me it was the tale of an individual shedding the layers of childhood to womanhood in such a vulnerable, sore way, of questioning decorum, attitudes and conventions and simply making choices to do or not do the right thing.

I’m always a sucker for a debut novel; I find the anticipation and the possibility of a future genius completely beguiling. And Real Readers have frequently given me that opportunity - books I wouldn’t have selected from choice. However this one is different, the title alone piqued my interest.

This story delighted me. It moves along at a perfect pace, not so fast that you cannot grasp the essential elements of the narrative but not so slow as to lose your interest. The dénouement of what Thea has actually done wrong was so gradually unwoven and all the time I was thinking it had to be this or that. Little morsels of clues offered urging you to read on, tantalising as Thea, herself, tantalised.

The characters seemed real, flawed, as we all are, aware of their shortcomings sometimes, but powerless to change their intrinsic being. And the evocation of the South, could this be Scarlett O’ Hara reincarnated?

I said earlier that I couldn’t say why I loved this book. I think I’ve answered myself in this review.

I read this as a pdf and I can't remember the provenance of it! Possibly and most likely it was from the group that only sent me ebooks as I had to offer up a star rating. I ended up feeling I’d rather be BillyNoMates than be friends with Judith!! It was a first novel and having revisited it I'm tempted to see what Annie Weir has been up to since. 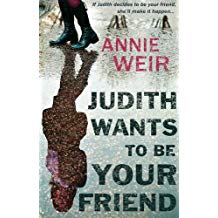 This is a tricky one to review without giving too much away. The Press Release gives little away other than to hint at the darker side of friendships. I find the appeal of novels like these curious -  I could not put it down, the compulsion to read it bordered on obsession almost. And why? The protagonist is not a nice person. There was little cheer in the entire novel. I was reminded of a couple of Jason Starr’s books where the same thing happens, uncomfortable, sometimes chilling reads and yet you cannot stop yourself reading. It also has that Patricia Highsmith quality of wrong decisions sending events spiralling along the wrong path and attempts to ’correct’ with another wrong decision send things out of control. And control seems to be at the heart of this. For Judith is a consummate control artist and what happens when a true control freak loses control? All hell breaks loose, everything unravels. And it beggars the question whether control really is control?

It isn’t often a debut novel grips you so firmly in its thrall. For me it fell short of five stars because I found some of the dialogue prosaic, it took us nowhere and I found the ending disappointing as if I’d been left dangling a little. But in a way there were few places left for Judith to go and I suppose you are left examining your own feelings about Judith and why she behaved as she did and, even more darkly, your own set of friends and acquaintances.

And if we really want to get paranoid, your own self!!!! Nah, just kidding.

I'd never read any Leigh Russell although this is the fifth Geraldine Steel thriller published in May 2013. Leigh Russell has legions of fans which is great. But I'm not one of them. Sorry. That's just the way it is. Reading is subjective and you simply can't love every book you read. I hope I've been fair and objective to a degree in the review though. 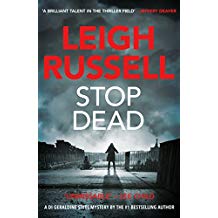 I was unfamiliar with this writer so when my Real Readers copy of this book burst through my letterbox I was excited. There’s nothing I like better than a good crime novel. But this is not a good crime novel. Maybe that’s a little too harsh. The plot is pretty tight and well constructed for the most part but I did realise who the killer was. Take away the crime plot and what you have left is …… more or less……chick lit.
For me a good crime novel uses words with economy and meaning. All the language is important and relevant to the crime but here there is too much unnecessary leit motive description. All too often we hear about Guy’s bulk and his muscles, but why? It played no part in the plot. At first I thought it was to suggest he was capable of the crime but it quickly became clear that wasn’t so. There are domestic exchanges about things like filling the dishwasher that do nothing to further the plot or develop the characters.
Geraldine Steel is not an unlikeable character but whether she can stay the test of time and take her place along side Miss Gladden, Miss Marple, V I Warshawski, Sharon McCone, Carol Jordan etc only time will tell. My guess is not, there just isn’t enough substance.
But how about if I’ve missed the ultimate intention of the writer? Maybe she intended to fuse crime and chick lit? Open the front doors of a new genre to a whole new audience through a side window?
If that’s the case then this book succeeds admirably.
Posted by Bookphace at 08:27