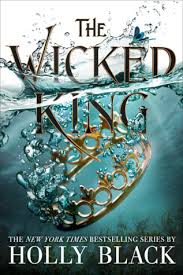 I so enjoyed The Cruel Prince that I was delighted when this next book in the series came up for grabs on the Readers First website. And I certainly wasn’t disappointed.

The first thing that struck me after finishing the book was to consider how accessible it would be to a reader who hadn’t experienced the Cruel Prince. For I was familiar not only with the characters but also the lore and landscape of Faerie. Ultimately my feeling is that to get the best from this book you do need to have read the first. Is that a disadvantage from the author’s perspective? Often I’d say, yes, but here I don’t believe that to be so!! I think this talented writer displays bravery and confidence in her existing audience that will carry the book through to as much success as the first.

Objectively what I look for in a sequel of this nature  is whether the writer has sustained and developed the core characters. Holly Black has definitely done that. I love the character of Jude Duarte. Strong, female heroines unafraid to admit their flaws and show their emotions, especially in a YA work, are a delight to read. You almost believe that this is how Katniss Everdene would behave were she transported to these magical kingdoms! The nuances of the relationship between Jude and Cardan are beautifully executed, so subtle in places, so obvious in others. Characters old and new take their place easily within the narrative. We see them. We hear them. They are so well drawn.

The plot is tight, well constructed, impossible to second guess. So there are plenty of surprises to make you gasp. The narrative flows easily, accessibly forcing the reader to feverishly turn page after page. Descriptions are palpable. To a degree in a fantasy type fiction you have to trust in the imagination of your readers to form their mind pictures but rich language does help! It is one thing to create a believable fantasy world but it’s quite another to sustain the existing imagery and cross references seamlessly. If a writer can do that then surely it’s a recipe for success? To leave your reader wanting more is a skill not all writers sustain but this reader would like more! It also occurs to me that, in time, this series would make some great cinema.

But storytelling is one art, extending that to something more is another still. What particularly impressed me about this story was the understanding Holly Black has of her intended audience which must surely be the YA market? Aspects of adolescence are so subtly dealt with and acknowledged without making a big deal or issues but just allowing them to flow naturally along with the narrative elevates the story to something more than merely a story.

A most satisfying read. And I look forward to the next. Thank you Readers First for the copy. And thank you Holly Black for writing!!