RETRO REVIEWING: A trio of books by various authors

For a while I reviewed for a group of enthusiastic and committed readers who were grouped geographically some distance from myself. It meant my participation in their group was limited and I was only offered ebooks. At the time of agreeing to review for them I didn't know that I would develop such an antipathy to digital reading! Ultimately my tenure with this outfit was relatively short-lived. The books they sent me seem to be little known stories by lesser known writers. Not a bad thing at all as I hoped to bring a wider attention to their work. I thought it  appropriate to group some together rather than offering separate blog posts for each story.

First is Barry Maitland"s Crucifixion Creek published in Nov 2015. This is the first in a trilogy which, to date, I haven't followed up. I believe Mr. Maitland is Australian and quite a prolific author. I thoroughly enjoyed this tale. 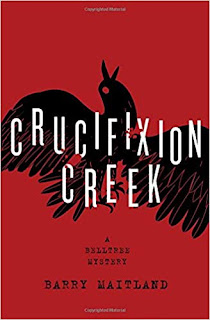 You know what? I don’t think I want to write a review about this book. I don’t think I’m going to tell you how good it is, how complex the plot is, how well the characters are developed, how each plays their part. I’m not sure I want to review how all the strands of the plot are eventually plaited together so we can make sense of the events. I don’t want to write about how you won’t be able to put this book down and how much tension there is within it’s pages, spiders’ webs of intrigue. I could review how many questions of morality are raised within these chapters giving us much food for thought, but I’m not going to.  I could even say how deceptive the premise of the book is, homicide, journalists, politicians, police, lawyers but I shan’t. I could even include in my review the fact that this is the first in a trilogy featuring Harry Beltree!! If I was going to write one. But I’m not going to review this book. I’m going to say to you get it; download it, buy it, borrow it, read it!!!

The second is from another, seemingly prolific, author although I had never heard of her before I read this book originally published in October 2015. 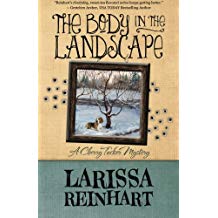 The Body in the Landscape - Larissa Reinhart

No messing about here, straight in with a dead body, barely time to settle comfortably. And I don't believe that to be a spoiler because I’m talking first sentence here!! I liked the easy going, first person style of chapter one.

But as I read on though I think we have a fine example of genre fusion here, crime and chick lit, not usually a combination to get me over excited.

But to say that I didn't enjoy this book would not be true for I did. However, despite a reasonably complex plot, more 'who is it' than 'whodunnit',  which always kept me thinking until nearly the end, it doesn't quite have the wow factor. I think it might have done had it not been overlong. Get rid of the chick lit aspect, I'm excited about the crime not that one of the characters has 'cerulean' eyes and looks good just out of the shower! (Am I getting old?) There was a sub plot that didn't seem to add much to anything and seemed largely unresolved by the end of the book so I didn't see the point of it. Pare down some of the descriptions that don't further the plot or add to the atmosphere and I'd say it was heading for four stars. There’s plenty going on in this book to keep the reader entertained.

I liked Cherry Tucker, Stephanie Plum she ain't, but there was enough substance to the character to engage and carry the book along. And I realise that this is by no means the first Cherry Tucker tale. it's the fifth. I’ve not read any of the others and maybe I would have benefited from doing so. I note that Ms Reinhart is the recipient of more than one award including being a finalist for the 2012 Daphne Du Maurier award. So respect is due. I’m not going to rush out to read more Cherry Tucker stories but if another came my way I’d read it and I dare say I’d enjoy it as I did this one.

The final offering is Revenge on the River published in October 2015. A french author Philippe Bouin prolific in his own country this seems to be the only book translated into English a fact I alluded to at the time of reviewing and that state seems unchanged. 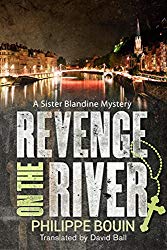 I think the actual bare bones of the novel is good, revenge and retribution for an environmental tragedy some twenty years previously and that’s just the half of it, a bit Erin Brockovich meets Jo Nesbo. We are introduced to Sister Blandine a nun whose habits (sorry, I couldn’t resist it), are occasionally the other side of holy. And it seems likely that this is the first in a series of mysteries featuring our wimpled heroine. (Will the next story be second to ‘nun’, I apologise, I couldn’t resist that one either.)

But the big flaw to me is the quality of the translation. When I learnt french at school one of the biggest challenges was mastering the tenses. I never did and I’m not sure if this translator did either!!
I found it hard to figure whether the story was written in past or present tense sometimes. It was certainly less than ‘pluperfect’ or maybe it was pluperfect, you see I never did master the tenses, maybe that is my difficulty here. Inevitably much is lost in translation no matter how good the translation is but here there were phrases and even sentences that made little sense. I think this is a very literal translation and it doesn’t always convey the essence of the native tongue or, more seriously, the intention of the writer.

So while I enjoyed the crime story per se the actual reading of it was a source of some frustration for me. Phillipe Bouin is an accomplished writer who has won awards in France and I fear this doesn’t do him justice. A cursory browse on Amazon indicates that this possibly the first of his books to be translated into english. I hope it won’t be his last but I would like to see a different treatment given to the translation.

However when I reached the end of the book and read the credentials of both the author and the translator I find the our translator has also won awards for his work! So, maybe I have got it all wrong, maybe the translation is superb and Monsieur Bouin is a quirky, idiosyncratic writer that just didn’t flow for me. Sacre Bleu! Oh, the subjectivity of art!!

There were some characters with potential, some were one dimensional and necessary plot props. The story moved along at an agreeable pace although the explanation of the final denouement seemed a little overlong to me.  But when all is said and I done I loved Sister Blandine and I want to read more of her. If it means signing up for a crash course in french translation then, to quote one of the characters in this book, “Gadzooks”,  I’ll do it!!