A couple of novels by the same author. It seems only sensible to group them together. The first was published in November 2014 and reading through the review I seem to have got my chronologies muddled.  This is the first Gregor Reinhardt novel despite what I suggest in the review and The Pale House, published in August 2015, is the second. There is a third in the series, The Ashes of Berlin, which I've not read yet. This was a very satisfying read, a thorough, substantial, meaty novel. What struck me with some surprise was how refreshing it was to read a story that started in one place and simply moved forward in time with the central character dominating. There were no split or multi time frames or flashbacks, no switching from one character’s perspective to another and I’m not saying that any of those are bad devices but it only struck me though reading this book how prevalent those techniques are in modern fiction writing. There was something almost old fashioned about the execution of this work because of it.

This is a competent, controlled piece of writing. It’s well written, thoroughly researched and informative and whilst you can be forgiven for believing it to be ‘just’ a war thriller it is only when you reach the end that you realise the ultimate truth that the protagonist embraces transcends the literal war and extends into the metaphoric.

The characters are believable as is the plot given the conundrums that war throws wherever it reaches out with its insidious tentacles.

I believe this is the second Gregor Reinhardt novel and I fervently hope it is not the last. I shall be seeking out The Pale House (when I’ve completed all my Real Reader’s assignments!) and I wouldn’t be surprised if Herr Reinhardt takes his place up there, maybe not with the Holmes’s and Poirot’s but certainly with the Harry Hole’s and Tony Hills. 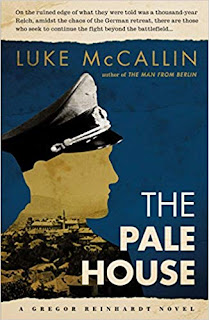 I read the first Gregor Reinhardt novel with considerable enjoyment. So I was delighted to receive this, the second one, from Real Readers.
There is a continuity between both books so it was easy to reacquaint myself with Gregor and find him intrinsically unchanged, a little more battered physically and emotionally but in fine shape to continue his role as a military Maigret.
It’s a story that pulls no punches and the senseless violence and brutality of war is never far away but I think what elevates these stories beyond mere war novels or crime thrillers is the thread of morality that extends throughout the narrative. So that by the end whatever the resolution or final denouement the reader is still left with plenty to think about.
It’s a sturdy work, muscular, strong characters with that curious rebellious detachment from decency that occurs in a war and that McCallin seems to comprehend with something akin to compassion almost.
The research is immaculate and historically, I guess that at a stretch this could be slotted into that genre, it is enlightening and humbling.
The plot is complex and it requires attention from its readers to understand all that has happened and why. As with the first novel there are no clever tricks, all the writers’ efforts are concentrated into furthering the narrative.
I hope there’ll be more Gregor Reinhardt books; I like him, I want to know he’s okay!!!
Posted by Bookphace at 08:27