The Hot Country published in 2012 was the first Of Robert Olen Butler's books that Real Readers sent my way. They were good enough to send me three more, two more Christopher Marlowe Cobb adventures and The Perfume River reviewed on this blog in 2016. Let's start with the first! 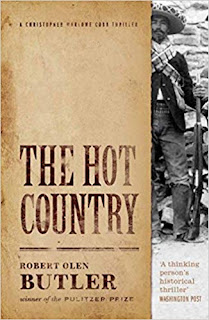 I loved this book!! From the opening sentences I was transported to the era of the Beats and when Tallahassee Slim was introduced I was walking alongside Kerouac again!
Clearly this is the work of an experienced writer who knows how to work and please his audience. I note that Mr. Butler is a Pulitzer Prize winner so he must be good!! And for me, he is.
If you like your swashes being buckled then this is the book for you. Page turning skirmishes of credible violence. But it wasn’t just blood and thunder there was an elegance to the form and style of the prose and the development of the characters that was simply so satisfying to read. It is an intelligent adventure story with enough diversity within the core of the story to keep attention and interest alert. In fact there is so much in the book that works alongside the basic tale. A treatise on relationships at several levels from filial, to lust, to love, to loyalty, to compassion.

My fear for a novel such as this is that it may be overlooked as just an historical tale of intrigue and war but it has so much more depth than that. Thank you to Mr Butler for writing this and as always thank you to Real Readers for allowing me to possess it! 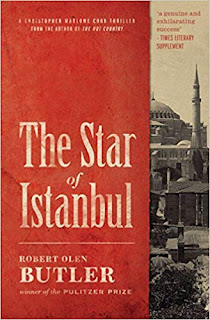 Real Readers was kind enough to send me a copy of The Hot Country a few months ago and I loved the book. It was the first of, what I see now will be a series of books, ‘starring’ Christopher Marlowe Cobb. So I was delighted to receive another book by Robert Olen Butler which is the second in this series with the promise of a third in the pipeline. And if Real Readers don't send that one to me then I will buy it for myself!!

I believe in the US it is referred to as ‘sophomore slump’, here in the UK ‘second album syndrome’ and whilst Mr. Butler has many novels to his credit this is the second of the Kit Cobb stories and could have fallen prey to the aforementioned predicament but it doesn’t, not in any way shape or form. So the problem in attempting a review is that I am forced almost into duplicating what I said when I reviewed The Hot Country.

It is just as good, with another well structured tale that is intelligently written, a high quality adventure story that is well paced with characters that are easy to engage with. All the clues were there to determine the final identity of the ‘baddie’. And I’m pleased to say that I did twig early on. But what was interesting was that often when you can figure the conundrum out early in the book it can make the reading of the book an anti climax. But this wasn't the case here. It was as if I had a little secret and I couldn't wait for Cobb to find out!

Again the historical details are fascinating and well researched. And in so many ways it is all a book should be if you’re looking to be entertained on a sustained level. The amount of bloodshed is possibly always going to be issue depending upon your viewpoint. But it is used here to offer up a moral dilemma on the part of, certainly, the main character so that it never becomes gratuitous.

And so now I patiently wait for Christopher Marlowe Cobb and The Empire of the Night.

Finally The Empire of the Night published in November 2015..... 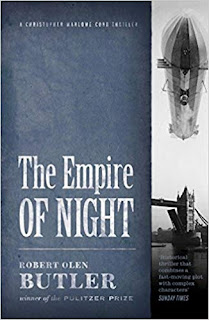 This is the third Christopher Marlowe Cobb thriller and I’m tempted to say that if you’ve read one then you’ve read them all but that sounds derogatory and that couldn't be further from my intention.
This edition, apparently, “is a special pre publication limited edition of 200 copies to mark the Robert Olen Butler UK tour”. But before you get as excited as I did the tour was in May and I missed it.

My real problem is what can I add to what I have already said in my reviews of the previous two books?  It is on a par with them, formulaic almost but without being predictable. What that does though is allow one to know what to expect from the writer. However all of these books can be enjoyed as stand alone tales. They all have a consistency within them.

What I particularly enjoyed in The Empire of Night is the development and exploration of the relationship between Kit and his mother. I thought that was very well done and captured enough emotion without being sentimental.

Other than that, again,  it’s structured, intelligent writing from an experienced writer. A good adventure story, a war story with a purpose, some cerebral violence that never becomes gratuitous, doesn't make it pleasant though. And plenty of characters created with depth and integrity.

It’s excellent of its genre and won't disappoint if you’re a fan of the genre, and the previous stories.