Another miscellaneous trio although I suppose there is a vague connection between all three as they deal with 'conditions' for want of a better word. Elizabeth is Missing, another book from the Genes Reunited Book Club, published in June 2014, won the Costa Prize of that year and went on to become a huge seller' 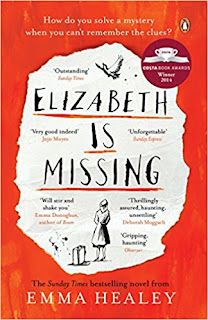 Unless someone has dementia and/or Alzheimer's AND recovers from it (unlikely) we can never truly know what goes on in the head of a sufferer. But I'm willing to bet that this writer allows us to come pretty close.
I think this is a brave novel. I think the subject matter lays it open to possibly adverse criticism. It's an emotive subject and for those people who are maybe close to the situation in the book this story may hurt. But for those who have no such experience this book may educate and enlighten and as such, then, it must be a good thing.

It's hard to say if I enjoyed it or not. It wasn't a fun read by any means but a good read is not always defined by the fun element. It was an emotive read, I felt for Maud and Helen. I found it interesting that the person most laid back about her grandmother's mental state was the granddaughter who tried to treat Maud as normally as possible.

I'm glad I read this book, it was well written, human natures well observed and the underlying mystery of Sukey running through it possibly saved it from being 'just' a study in dementia. Thanks Genes Reunited and Penguin books for another opportunity to read a book I might not otherwise have chosen.

I'd only heard of James Sallis because of the film Drive with Ryan Gosling and Carey Mulligan so this book, published in October 2013, didn't excite me initially because I thought it might be a violent read. Was it? Oh, no. You read the review. ;-) 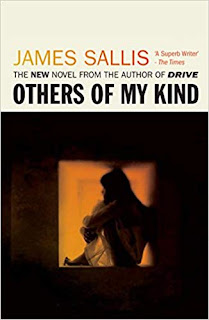 Often when I have seen and enjoyed a film or TV drama that has been adapted from a fictional work I feel compelled to seek out the book and read it. I saw the film Drive but felt no such compulsion; the violence and intimidation of the film weren’t themes I was keen to pursue. So another book by James Sallis didn’t excite me when Real Readers offered it my way.
But this novella by Mr. Sallis has gone some way to modify my first feelings towards him.
I loved the economy of language in this book. There’s no lengthy, flowery, descriptive passages the tale flows along on the surface of the nitty gritty.
In our troubled social times much concession is given to the past or childhood experiences of those with anti social or criminal behaviour as if it can in some way excuse their excesses. What I love about this book is that it suggests that things don’t have to be that way. Quite the reverse; an appalling start in life can engender a caring, positive, purposeful human being who maintains a compassion even for their aggressors.
And there’s nothing more to be said.

Closing out today's trio is the first of the Rosie(Don Tillman) books by Graeme Simsion. I haven't read any of the others because Aspergers is too close to me for comfort. 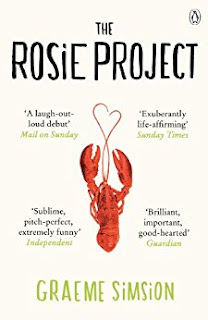 I found it hard to be objective about this book as it touched a nerve. My nephew has Asperger's Syndrome and so I found it hard to laugh as for him it’s no laughing matter.
I wept whilst reading Mark Haddon’s The Curious Incident of the Dog in the Night-Time and I came close here. And I suppose that is testament to the skill of the writer that he so accurately observes and understands the mind of this type of autism. Perhaps it’s good to laugh about it? And there were potentially some very funny moments in this story but they were all tinged with pathos because the reactions and inter reactions were so real.
It was also quite sugar coated, how did Don land a job like that? It is not unusual for Asperger's sufferers to remain in the land of academia where their intellect shines above all else but I think of my nephew in an interview situation and it doesn’t ring true. And unlike many sufferers Don did seem to maintain some social relationships.
My hope for this book is that it becomes a best seller and continues where ‘Curious Incident…..’ left off, to inform and educate the world about Asperger's Syndrome and promote understanding of people like my nephew. If he could meet a ‘Rosie’ I would be over the moon but life isn’t a novel and it remains unlikely.

And I’ll say no more which may sound like a cop out but I don't want to be unfair to the writer. I’m just too close to this subject to make fair comment.
Posted by Bookphace at 08:10