RETRO REVIEWING: The One Plus One - Jojo Moyes

Published in July 2014, for me, this review is less a review of the book than a questioning of my own literary prejudices and a consideration of realism versus entertainment in fiction maybe? It makes me faintly uncomfortable reading it now. I just feel like a pretentious twat. I'm sorry. And I'm still not a chick lit lover........ 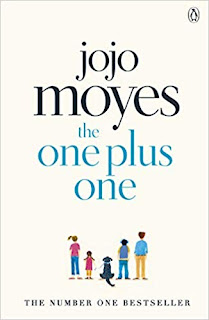 The first Jojo Moyes book I read was from Real Readers; it was The Girl You Left Behind. And I thoroughly enjoyed it. So much so that I actively sought out Me Before You and read that.
And thus I was delighted when the postman handed me the latest offering from Ms. Moyes.
When I reviewed The Girl You Left Behind I pondered the need we have nowadays to pigeonhole and compartmentalise. And I cited several genres that the book could be placed in. I don’t need to do that with this book, as it seems to me that it is clearly ‘chick lit’. This poses a conundrum for me personally because I would say, in general, I don't read or enjoy chick lit.
But I did enjoy this.
So I would say from my own experience that this is chick lit of a higher quality. It is well written; the characters are defined and identifiable. The narrative is intelligent, contemporary and well constructed. There was even one point, and I think Norman was the catalyst, where The Hotel New Hampshire was called to my mind. I’ve read everything by John Irving and chick lit he isn’t.
And I find myself questioning why I can access this book within its genre and enjoy it so much. Am I such a ‘literary’ snob that it’s a form of bookish prejudice I am practicing that I am even making these comments?
Pared down to its basics this book is somewhat predictable and contrived with all the ends neatly tied up and everyone seemingly riding happily off into the sunset. Completely unrealistic. Life just isn’t like that. But………….SO WHAT!! Isn’t it good to think that maybe it could be like that? This book is to entertain not educate or provoke a million and one thoughts about the meaning of life etc etc.
Is it possible that I am finally getting the point of chick lit?


Jojo Moyes? I thank you.