I've read a great number of books about the Holocaust, factual and fictional. It's a subject that continues to absorb me. Ten years ago I visited Auschwitz, the memory of which invariably moves me to tears. This book published in March 2015 seems to be the only book this writer has produced. Somehow it fills me with even more respect for him. Rereading this review makes me cringe a bit because I sound like such an opinionated smart arse. There's been an increase in fictional works about the Holocaust in recent years which also dates this review somewhat. But this is what I wrote!!! 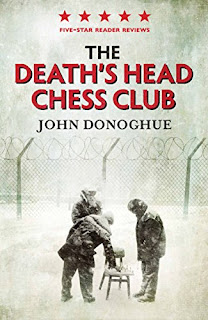 I suppose this is a timely publication given the 70 year anniversary of the liberation of Auschwitz-Birkenau.

But it is a brave writer who attempts a work of fiction about the Holocaust. Is there room for sentiment or poetic licence? The history of the Holocaust is well documented so there is no room nor excuse for inaccurate research. There are survivors for whom the subject is too painful for them to speak of so there is an argument for those who can, to perpetuate, by whatever means, fact or fiction, the knowledge of this atrocity. And so Mr. Donoghue receives a mark for that.

The use of the chess game as metaphor in the cultural arts is not a new one. It’s the first time I’ve seen it used within the subject of the Holocaust. And its given me food for thought. Did anybody see it as a game? I liked most of the chapter titles being given a particular chess reference. I do not play chess and am ignorant of the subtleties of the game. I believe it to be a thing of beauty from what I have seen and heard and I think it has been cleverly used here. I am sure that the term ‘pawns’ has been utilised to describe the occupants of any concentration camp. Mark number two for Mr. Donoghue.
Also the story raises the ever present conundrums that must perplex all students of the Holocaust.
Why there were so few rebellions amongst the multitudes within the camps whom outnumbered their captors but were without ‘resources’. And why those engaged in such wickedness didn’t rebel against it at the time? Even as I write them I know they are questions without answers. We know of certain German individuals who saved lives, Oskar Schindler for one. And I have no doubt that there must have been German officers who did not believe that what they were doing was in any way ‘okay’. And in this novel Paul Meissner represents that view. I believe he is a symbol for the true feelings of many. I hope so anyway. So that is a third plus mark for John Donoghue.

I know, from what I have read and seen, that many survivors experience an overwhelming guilt for having survived when so many perished and also how many survivors never find it in their hearts to forgive what was done. It is suggested that Emil does but I remain unconvinced. No marks here.

What I also find unconvincing is the passage of time where the three protagonists appear to reconcile with each other at the chess tournament in Amsterdam in the 1960’s in such a relatively short space of time. All individuals are different, granted, but there are many survivors who took twenty plus years to even speak of their ordeal and the barbarity they witnessed to their closest family. No marks here.

At the conclusion of the book there is something touching about a survivor and a German returning to Birkenau but also something slightly unbelievable about it. It does convey how very bleak Birkenau is. I have never been anywhere in my life where the evil is so very palpable. So a mark there for accurately conveying how it feels to be at Auschwitz ‘after the event’.

I do find myself questioning why anyone wants to write a work of fiction about the Holocaust. John Boyne received some criticism for The Boy in the Striped Pyjamas because there never would have been any children left alive to work at Auschwitz, they would have been gassed upon their arrival. It brings me to my earlier point about room for sentiment and poetic licence. But I suppose the real merit in these fictions is to never allow the Holocaust to be forgotten in the hope that nothing like it will ever happen again. People who may eschew factual accounts may read a story. And for that I’ll award two marks.

Put to one side the emotive subject matter and this is the work of a credible and capable writer. An ably constructed novel where the shift in time frames is dealt with smoothly. Some of the characters are stereotypical and subscribe to our existing view of Nazis, Gestapo and the SS but the main characters are allowed to develop their personalities. The research is sound and if this is a first novel, and I believe it is, there is something to look forward to in the future. A further mark.

You are a brave man, Mr. Donoghue, to tackle this subject in a fictional work and I award you seven marks out of ten.