Yet another trio of ebooks today. and that's all that links these diverse writers and titles.

The first was published in November 2015. 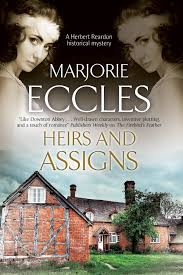 Both my parents were alive during the year in which this story was set, children granted, but living nonetheless which makes it slightly hard for me when I see this identified as an historical novel! But that’s what it is!! Though as I was drawn into the narrative it became almost timeless. A tale of people and families, of reactions and interactions.

In so much of todays novel writing, and not just the crime genre, there are so many attempts to be ‘clever’. A little like supermarket brands producing new improved, enriched this and that. I don’t mean to suggest that it’s a bad thing, there have been some incredibly creative and stimulating works produced. But sometimes it is wonderful to pick up and enjoy a straightforward, storytelling whodunnit. And with this tale Marjorie Eccles has ‘dun’ it.

A slow, languorous sojourn in the Shropshire countryside in a sleepy little village that conjures Marple and Agatha Christie herself. Passages of descriptive narrative reveal the world we are entering. It’s the work of a writer confident in her own skin. It’s economic but with no lack of relevant detail and substance. And the herrings are pinkish rather than red.

The characters seem to fall into two quite distinct camps; those we like and those we don’t like and those we thought we liked until we didn’t like them!!! Sorry, that’s three camps!!! And they were well defined within the story.

This is not a page turner but I don’t think that was the intention of the writer. This is a pleasant, easy, satisfying read, one for the train or the beach maybe.


This second YA novel saw the bookstands in April 2016. 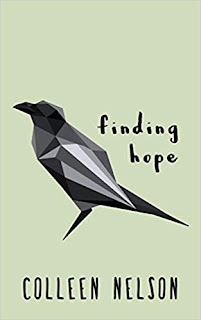 I think this book is probably intended for a younger audience, I believe the genre is Young Adult. Well I’m an Old Adult. An old adult who hasn’t grown up yet, maybe, but still old. And so I found this very resonant of much I’ve read before.

Thematically a story of drugs, abuse and bullying. It’s been done before many times and whilst this is by no means badly written it doesn’t really cover any new ground. Using ‘Hope’ as a name and a noun is not new either, there have many films and stories using that device. It works as well here as it does anywhere but it’s becoming a bit hackneyed now.

The characters are well written, serve their plot well but there is no ‘wow’ here. What makes me feel a little sad is the motivation for reading a story such as this. I fear it would be appreciated  by those who identify with the key issues. I do wonder whether this is a work of catharsis for the writer? If so then it can be nothing but worthwhile. If not then I hope it offers something for those younger readers who stumble across it and are given some food for thought.

it’s not a feel good read but there is a suggestion of redemption at the end. I fear I’ve been rather negative about this so I’ll conclude with something positive. I liked Hope’s little poems scattered throughout the book. A nice touch.


And finally this western flavoured story in September 2015. 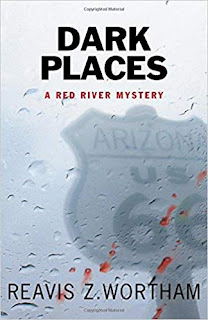 As I began this story I was shocked to see that this is the fifth Red River Mystery and I’ve read none of them until now. Does that make me a bad person? Nope, not yet awhile, y’all.

I was perplexed by the writer’s statement of intent at the beginning of the book. Alarm bells go off in my head. If you have the need to explain your work there may be something fundamentally lacking. I’m one of those who believes in subjective interpretation of a piece of art whatever it may be, music, sculpture, painting, writing etc. I believe an audience should be credited with enough intelligence to figure it out for themselves. So I was bristling a little before I even started the novel.

And then,  …………., this writer quoted, in its entirety, the Navajo Prayer of Healing. And just like that reeled me right in and I couldn’t escape.

So, I enjoyed this book. At times it seemed like a pastiche of so much that has gone before. The ghosts of Tom Sawyer and Huck Finn, Scout and Jem Finch, and I’m sure I spotted Idgie Threadgood, all wandered in and out from time to time.

The dialogue was tight.I could hear the Texan drawl as I read. In fact you have to forgive me, y’all, cus I just cain’t stop writin’ like a Texan!!

The fact that the town was called Chisum made me me think of John Wayne and the western feel was sustained throughout. I don’t think I pictured many of the male characters without a Stetson.

This is experienced writing, it’s storytelling and it’s maybe a tale the like of which you’ve heard a thousand times with different names and different places but none of that detracts. There can be comfort in familiarity.

There’s a wonderful soundtrack running through and complementing the narrative which I felt could have been made more of, but that’s because I’ m an ageing hippy who can relate to all the music references and I loved them.

Loads of characters; some I believe starred in previous Red River stories, young and old, so it’s a book accessible to a wide audience.

There’s a dual narrative here, the crime of which we are party to right from the start, and another issue which derives from the crime but runs alongside independently. The two stories are quite skilfully interwoven and you’re never taken away from either one for very long, and in a sense the reader can just sit back, enjoy the story and see how a resolution is figured out, It’s undemanding cerebrally. There’s plenty of action, plenty of humour and plenty of heart ache. But it’s all tidied up by the end of the tale.

I still can’t figure how I’ve missed Reavis Wortham!! Does it make me a bad person? Nope, cus I just done read me this one.But reckon as how I better git me some more Red River Mysteries y’all.