I think family sagas were very much in vogue a few decades ago. I know my Mum used t0 enjoy them and often passed them on to me. It's not a genre I actively seek out and I remember the first time I saw the category adorning a shelf in my local library. I recall feeling unimpressed!! But I enjoyed these two. And Nadine Dorries has a new book out I believe so it seems a good time to post this.  This story was published in December 2015. 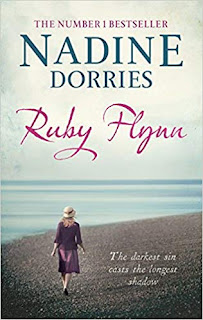 Nadine Dorries is a new writer to me  and this book was a delight to read, to be sure.  It is a competent piece of writing which does a good old fashioned job of straightforward story telling. It is the kind of book which highlights all that the love of reading is about. The reader is taken from our own world to the world of others and allowed to become enveloped in these lives so very different from our own. A world of Lords and Ladies and housekeepers and scullery maids. Of Ireland and  Liverpool, cottages and castles. A world of myth, secrets and intrigue, of fate and tragedy, love and death, villains and heroes. Although I have to say this book is populated mostly with the good guys.

What prevented me from awarding five stars was the conclusion. It seemed to jump from a credible resolution of the bulk and meat of the novel to a fairy tale like future for the protagonists. And that ending might have worked had there been something in between.

If you are a genre junky then I guess this tale is  a ‘family saga’.I believe there is a short prequel to this book which may or may not chance the enjoyment of Ruby Flynn.

As for Ruby herself? She is quite the storybook heroine and what’s not to love about her? Certainly most of the other characters in the book do!! I can see this making a good period drama adaptation for TV. I’m not talking  Downton Abbey exactly but you get my drift?

Now if you will excuse me I have to go and ask Santa if he can slip a couple of Nadine Dorries’ books into my Christmas stocking this year. I have been good, I promise. 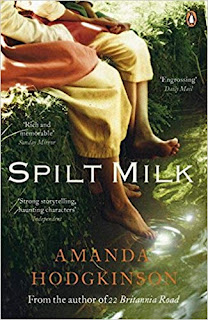 During a brief yet satisfying flirtation with genealogy where I joined Genes Reunited for my research I was part of their Book programme in association with Penguin. A monthly book was up for grabs and I enjoyed several family tree flavoured novels. Here's one published in February 2014.

Firstly may I thank Genes Reunited for giving me the opportunity to read this novel. I thoroughly enjoyed it. I was unfamiliar with the writer before I received the book but I feel motivated to seek out more of her work after reading Spilt Milk.

Immediately I read the title the rest of the saying popped in to my head, ‘No use crying over…..” and that does seem to sum up the stalwart attitudes of the main protagonists in this story as well as maybe a wider, more metaphoric meaning.

In many ways several aspects of the plot are predictable but the subtext carries you along relentlessly like the river in the novel, which I see as another metaphor running through the entire book.

There are rich descriptions of the Suffolk countryside that evoke the sights, sounds and smells of the country. And the atmosphere of the pre war London pub is almost cinematic in its exposition. But whatever the location the writing remains elegant yet economical without stinting on the necessary information.

But it is the women in the novel that carry everything along and draw all the strands together.  Some may describe this as a family saga but it is deeper than most. The relationships between all the women from Rose through to Birdie’s granddaughter are bound by threads some so fragile you doubt they can hold with others so strong as to be indestructible.

And the much-worked literary theme of whether history repeats itself through the generations is fundamental to the plot, and possibly contributed to the predictability. But it is less the events that grab our attention more the effect on these women that give the novel its strength.