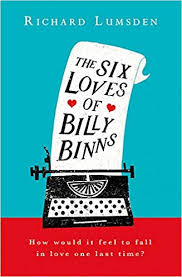 I found this book to be a complete and utter surprise! Firstly, I hadn’t been expecting it, it just turned up! So, thank you Tinder Press. Secondly I looked at the cover and the title and the blurb and I thought it was going to be a light, fluffy almost frivolous read from an actor who I remembered from the Catherine Tate Show. Oh, how wrong could I be! For what I read was a moving, considered work about the nature of ageing and what it can do to the body and the mind and how hard it is to hang on to all those experiences from our lives that have an influence on who we are and how we feel.

There was a BBC Radio 4 Afternoon Drama broadcast with Tom Courtenay as Billy in 2013 (worth a listen if you can find it) and I guess the idea for a full length novel came from that.

Billy Binns (I think the name ‘Binns’ contributed to my initial notion of a more superficial read?) is over a hundred and all too aware that he cannot endure for much longer. He is resident in a Care Home. As he ‘rages, against the dying of the light', he wants to remember love, what it was, what it is, what it felt like…….. What follows is the life story of a man born at the start of the twentieth century who lived and loved through two world wars.

It’s a dual narrative with the meat of the book being Billy’s life story which centres around his loves and relationships. The more cerebral parts come from Billy’s residency in the home and how his thoughts, fragmented at times, recall the past and reconjures the depth of his emotion.
The character of Billy is ably sustained throughout the novel, he’s no angel but he’s honest and there’s no overt sugar coating. The other characters fade in and out of the story as one might expect when a life of such longevity is being described. There are times when they seem to be functional at best, Clem maybe and some of the Home staff, but others step off the page with more depth like Mrs.Jackson and Vera.

Interesting to consider how this book might resonate with an audience of varying ages? If you are heading towards, shall we say, more mature years there is a poignancy to some of the novel. The sense of missed opportunities, lost loves, and regrets should strike a chord with older readers. Younger readers may think of their parents, grandparents in a slightly different light as the unfolding of a life and the development of a person through a sustained period of time is described.

There is plenty of history too; conditions and aspects of both WW1 and WW2 are covered authentically. Sociological trends through two millennia are touched on yet it is not a book that sets out to educate. It is first and foremost a novel about an old man wanting to hold on to love. And isn’t that what we all want to do?