Ever since I read this duo from Mr. Quinn he has been on the periphery of my reading radar and I've wanted to read more of his books but to date I just haven't managed it. The first, published, in October 2014 whetted my appetite although reading the review I feel I've been less than kind to a book I really enjoyed. 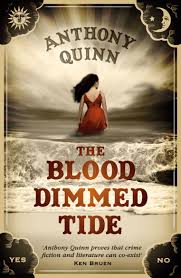 It seemed to have been a while since Real Readers sent me a book so I was delighted when this thumped through my letterbox. I found this a curious book. It seems to attempt to function on several different levels but never quite seems to hit the mark on any of them. Having said that though I did enjoy reading it. There was much to admire.
When I began reading I had to turn back and look carefully at the details of the author and publishing details for it read not as a book of a contemporary writer but an author of the time described in the novel i.e. in the style of a turn of the century novelist. I thought that was very well done. I also liked the chapter headings as tarot cards.
I struggled to really get into it to begin with and had to re read the opening chapter more than once, as my attention wasn’t captured. The introduction of W.B Yeats did grasp my attention though as he is a poet I admire and I’m guessing Mr. Quinn does too. I like the idea of taking a hero and constructing a novel around that hero but there was something that didn’t quite work.
I enjoyed the crime story the most. I thought that was the aspect of the book that worked the best with the occult facet complimenting it. I don’t like to ‘do’ spoilers and I apologise if that does happen here but I loved the fact that the ‘baddies’ were almost the clichéd ‘baddies’ that used to occur so often in crime novels it was banal but in recent times have been eschewed as being too obvious so it really works as a device here. And I kicked myself for not seeing it coming!!
The Irish political situation left me cold not because it was handled poorly here but because politics in general leaves me cold!! I have little doubt that the historical facts are accurate. I knew that Maud Gonne was politically active.
I think there are too many sub plots here which had the tactic worked would have given the book a wide appeal but for me it all fell just a little short. There was romance, crime, politics, the supernatural, espionage, and literature, perhaps too much for a relatively short book.
I realise that all sounds a little negative and maybe I am contradicting myself when I also say that it is a very worthwhile read.

The second novel I read, published in September 2015, continued to intrigue me. And now I'm more determined than ever to seek out some more recent work of Mr. Quinn's. 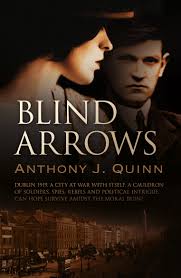 I read The Blood Dimmed Tide with reservations. There seemed to be an attempt for the novel to function on too many levels for it to succeed as a cohesive whole. That having said I did enjoy the book.
And so my initial response to receiving Blind Arrows from Real Readers was one of curiosity. That deepened as I read the blurb not least because, again, the author choose a real life character to weave his tale around. Only this time it was Michael Collins, not W.B.Yeats.
Whether Mr. Quinn read my review of The Blood Dimmed Tide or not I don't know !! But he seems to have achieved a more accessible level with this story and not tried to scatter it with too many sub plots.
It's a thriller interwoven with the politics of a 1919 Ireland and both need each other for the book to succeed and it does succeed in my opinion.
Something that struck me strongly was the authors solicitude for his characters and the labyrinth of intrigues that they find themselves in. There is an almost Kafkaesque atmosphere as Kant struggles to find his killer.
Also of interest and serves to depend our involvement in Kant's odyssey is that the reader is given the identity of the killer by Chapter 6 so our sensibilities as directed towards how Kant can seek out that identity. We are saved the job in one sense and therefore put all of our energies into observing if and how Kant can do it.
It's a novel of secrets; of unravelling those secrets and identities and realising that not everything is as it seems.


There's a pervasive bleakness to the whole story, perhaps because, historically, we know what happened in Ireland but I didn't feel that detracted from what is ultimately a well written book with an intriguing storyline.
Posted by Bookphace at 09:37