I read a lot of crime and thrillers so it's not surprising there's another trio post. The first, published in December 2015, I enjoyed very much. I know Mr. McCrery's TV series endure, I guess his fiction will too. 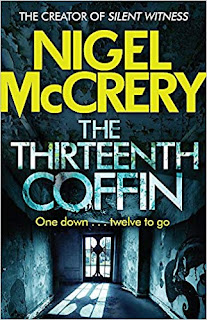 You do not have to read this book. But it may harm your defence if you do not. Anything you do read can be given in evidence.

May I make a suggestion? Before you read this book? The suggestion is this; allow yourself plenty of time because you will not want to put it down.

This is such a satisfying read. It’s well written, concise but not brief, all we need to know is given to us. The characters are accessible and crucial to the development of the story. There’s an element of predictability to the identity of our villain but it didn’t detract from my enjoyment of the book. The familiarity with police  procedures is accurate and plausible. The pace is maintained throughout and a level of tension endures as a backdrop throughout the book.

The main detective has such an interesting health condition it adds to the interest. It’s unusual. It’s all so tight and well thought out and if I have to say anything negative it is that the ending is a little anti climactic but then the bulk of the book is so rich the come down probably couldn’t be anything else. It’s a very visual book too and would do well as a TV adaptation and that should be no problem for Mr. McCrery given his screenwriting pedigree of things like New Tricks and Silent Witness.

Flambe in Armagnac was just a delight to read. It hit our shores in August 2015 and I always meant to read some more books by these guys but alas, to date, I haven't. If there's an argument to living a long life it is surely to be able to read all the books I want to read. 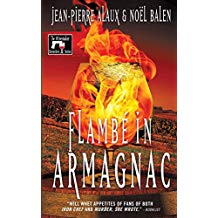 Having recently stayed in rustic, rural France this little novella was right up my Rue!!

And, for me, a new genre has landed - Gastro Crime. The homage to food and drink throughout this story almost outdoes John Lanchester without the madness of The Debt to Pleasure. But this surely was a pleasure to read. And for anyone who might be daunted by a five hundred page plus crime thriller then I think this is an ideal solution. I believe this is just one story in a whole series. And I don’t know if my mouth is watering from the thought of more of these stories or the descriptions of food.

However this is a translation and I always think you’re only getting half a book when you read a work in translation. Through no fault of the translator the subtleties of the language, the idioms and cadences are lost.  So there is a slightly staccato feel to the flow of the narrative. Sacre Bleu!! I wish I were fluent in French and could read this in the original. I would probably give five stars.

But, translation, notwithstanding we are treated to a delightful menu of French customs and etiquette. I had absolutely no idea that the much parodied and emulated cheek peck kisses follow strict regional protocol as to how many kisses should be offered to each cheek!! And apart from how to drink the stuff I knew nothing about the production of brandies.

And to the crime story itself. It is compact and accessible. Paradoxical almost as it is understated, undemanding and yet there are the intricacies and complexities of a crime plot. I found a predictability as the story unfolded but it was the unravelling of the details of the crime that allows the book to get away with that. I’d need to read some more in the series to refine my opinion but I think these would make a great TV series.

I have a very clear picture of Benjamin Cooker, his competence and professionalism. Indeed all characters have their clear parts to play. No one was gratuitous. Some were a little one dimensional. But our main protagonists were believable.

There was something almost delightfully old fashioned as the mature, experienced Benjamin allowed his younger sidekick to learn and develop alongside him, something Holmes and  Watsony? Maybe that’s a step too far. It wasn’t quite Batman and Robin but you get the idea?

And I loved the name of the dog!! So apt. I’m not going to tell you what it is. I don’t do spoilers.

This was the first British Library Crime Classics I got my hands on but it was an ebook from the outfit I reviewed for who only offered me ebooks. I had no idea of what was in store for me when I was accepted onto the British LIbrary's mailing list. I've had many of the subsequent titles with their glorious cover art and they're a treat. This one originally published in 1953 was republished by the British Library in 2016. 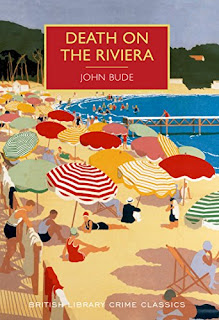 Reading this book was a joyous event! It was like Famous Five for grownups but with ‘lashings of information’ instead of lashings of ginger beer. What a delight to read such a cerebral crime story. And with little in the way of forensics and technology it was a real workout for the brain. It was so easy to feel transported back in time when villains were cads and bounders, ladies were ladies and all stereotypes and political incorrectness no longer seems to matter whilst you are enveloped in 1950s French Riviera life. The characters are almost but not quite caricatures and they leap out of the page at you. The initial premise is very simple; two British policeman sent to France to apprehend the ringleader of a counterfeit currency scam going on in France. Co operation with the French police is limitless but there the simplicity stops as the plot thickens, as they say. As the title informs us there is a death. But much happens in the book before that point. The unravelling of the crime and its executions and the motives are ably detected by Detective Inspector Meredith and the treatment is reminiscent of the narrative device used in the BBC TV series Death in Paradise. I wondered more than once whether Bude might in part be the inspiration for the series. It’s an unpretentious read that just revels in its genre and it’s historical period.