No real intent behind this grouping. A miscellaneous collection of reviews books! Last Days of the Condor was published in August 2015 and it plopped through my letter box one day. Reader, I liked it. 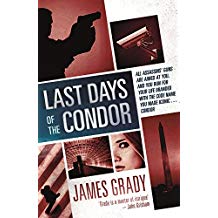 Mr. Grady is a best selling author and with good reason. This story is a tour de force of excitement and precision. I barely had time to catch my breath. It is truly action packed and I enjoyed it immensely. I found it required a high level of concentration to get the best from it as some of the spy protocols and practices were convoluted to say the least, as well as incredibly clever and well thought out. The tension and intrigue were sustained consistently . Violent in places but necessary violence for the most part to make it clear how ruthless a business espionage is.

I found the characters believable within the contact of the setting. Whether the character of the Condor was sustained from the first book I can't say as I haven’t read it. But the characters retained their humanity throughout in spite of the sometimes awful things they endured and carried out themselves.

Someone I was reviewing for absolutely raved about Shantaram and was desperate for an ARC of the follow up. I believe that I received this advance copy of the follow up accidentally as the publicist misinterpreted the email from her which was requesting a different book to be sent to me. Two books were sent to me. So I read and reviewed them both.  It would have been rude not to! (The lady I was reviewing for did get her own copy of The Mountain Shadow, published in October 2015, I'm pleased to say). 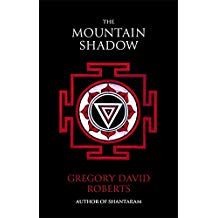 Before I begin I must confess that I haven’t read Shantaram. I know, I know, I feel bad that I have been privileged to read The Mountain Shadow without serving my apprenticeship. But I do now have a copy of Shantaram and I will read it. Although I may change my opinion retrospectively when I have done so I don’t feel that my enjoyment of The Mountain Shadow has been compromised by the omission.

This book is a glorious paradox. On the one hand you have a catalogue of criminality; torture, corruption, the mafia, violence, fraud, bribery, drug abuse, prostitution, gang wars, arson and then you are treated to aphorisms that would grace the pages of any new age, self help book of spiritual insight. At one point I thought Gregory David Roberts had morphed into Neale Donald Walsch and I was reading Conversations With God!

The breadth of the novel is immense, at 800 plus pages it has to be. It’s a thriller, a crime story, a love story, an adventure story. It has history, sociology, religion - surely something for everyone? And it all moves along at a cracking pace. There is a yin and yang to it all, synthesised by Shantaram himself and all kinds of questions are thrown up about good and bad, friendship and enmity, revenge and retribution, wealth and poverty and deeper issues, can a criminal also be a good person? And I sometimes feel myself inadequate to express the bounty within this work and do it justice.

My understanding is that this, in common with Shantaram, is in part autobiographical with that indefinable Kerouac-like fusion of fact and fiction. And the characters contained within seem so real that you have to believe they are drawn from real life connections.

And if I was pressed to define subliminally what this book is about what would I say? Love? Loyalty? Synchronicity? Hope?

And I am humbled for this book deserves better words than I can give it. So I’ll stop trying except to say that it has been more of an experience than merely ‘reading a book’. I have been ‘shantaramed”.


This crime novel, published in November 2015, was the book referred to in the introduction to The Mountain Shadow review. I enjoyed this so much I bought some other by Carrisi which I have yet to read. He's a thinking man's Dan Brown. 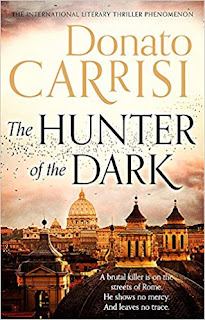 Signor Carrisi is a new writer to me and you know what, I dread finding a new writer I like because it means I now have to go and find everything he’s ever written and add them to the pile. To quote Maud Casey, ‘I was born with a reading list I will never finish.’ and now I add Donato Carrisi.

I was drawn into this from the very first sentence and I couldn’t put it down. It was almost like an Italian Tony Hill, and Carol Jordan, the profiler and the policewoman. But add to that heady mix liberal helpings of psychology, philosophy, theology and more besides and you have a story of substance. and I think that’s what elevates this tale beyond the ‘ordinary’ crime thriller, there are so many layers to satisfy the discerning reader.

Credit, too, must go to Howard Curtis, the translator, who has done such a marvellous job. Italian is such a musical language of rhythm and richness that could so easily have been lost in translation but not so here. The descriptive passages retain all of the flow that they must enjoy in the original language.

There is so much going on on this story that it would be a crime in itself to try and précis it, something I am not keen on anyway. So if you enjoy crimes and thrillers and some kind of substance to your reading I doubt you will be disappointed with this novel.

It’s a complex plot with strands and sub plots that tantalise without becoming too muddled to persevere with as can happen sometimes.  There are clues a plenty and herrings as big and as bright as Royal Mail pillar boxes. I will smugly say that I did figure out the premise of the killer’s motivation but instead of diluting the latter stages of the book it was enriching.

There’s nothing more I can say. Reading what I think is wasting the time you could be spending reading this book. Go do it. Now.