RETRO REVIEWING: Another trio of ebooks by various authors

Another trio of books grouped together for no reason other than they were ebooks sent to me from a previous group I reviewed for.

The first one from Michael Jecks, published in April 2016, earned me a thorough roasting on Amazon from a disgruntled Jecks' admirer  who implied I was 'full of myself', 'puffed up' ! I'm not sure anyone who knows me would ever describe me as that! But, you, know, I get it. If anyone implied any criticism of my favourite writers I would leap to their defence I'm sure. 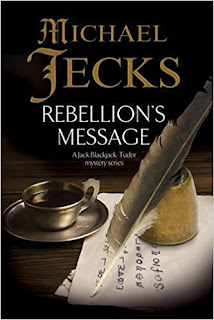 Right I have to get this off my chest before I start because its bugging me. From the moment I started this book Leon Garfield’s Smith came into my head. And I haven’t the faintest idea why. Wrong century for a start and it’s a childrens’ book. What’s going on in my head? Answers on a postcard please.

Okay and now to business. Jack Blackjack,no I’m serious, that is his name, is a lovable Elizabethan rogue romping around the metropolis picking pockets. He gets framed for a murder he didn’t commit. And the contents of a mysterious purse fuel this historical mystery against the backdrop of the Rebellion of 1554.

There’s a faintly comedic element to this book, I’m not sure if it was intended or not , as we follow the hapless Jack through a veritable labyrinth of villains, clues, false leads and spurious companions liberally sprinkled with some unpleasant incidents.

If you’re a history buff I think you’ll enjoy this. I am a history buff and I enjoyed it. It’s a fair paced tale and images of a dank and murky London underworld are well conjured here. You can’t help feeling sorry for Jack despite the fact that he is a bit of a wrong ‘un.

The factual research seems pretty sound from my relatively scant knowledge of this period. Actually my own perception of Queen Mary differed widely from Mr. Jecks’ portrayal. But then I’ve always rooted for Lady Jane Grey.

The one issue I do have is with language. The word ‘git’ is used frequently,  so much so that I researched its etymology. According to ‘SmittenbyBritain’ and ‘worldwidewords.org’ it dates back to 1940!! However it is a variant of ‘get’ which appeared in Scotland in the 1500’s and is possibly a Middle English word. Also I don’t think being ‘pissed off’ is an Elizabethan phrase? If it was wouldn’t Shakespeare have used it with relish?

But perhaps I am nit picking? I do believe that historical fiction should have a firm factual and linguistic foundation. What do you think? Answers on a postcard please, no,wait! I’ve already done that!

P.S. This is apparently the first Jack Blackjack mysteries. There are more in the pipeline.

This was a great exercise for me in terms of objectivity. Published in August 2016 it's a ghost story which I am not keen on. So I had to put my personal preferences aside and focus on the book. 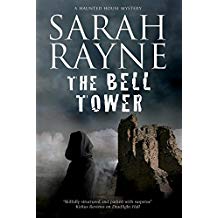 Subjectively I can only give this two stars. This isn't a genre I dislike, it's a genre I loathe. Ghosts and supernatural stories spook me on a number of levels. I am uncomfortable reading them.
However, my dear readers, as a reviewer, this is an excellent opportunity for me to summon every gram of objectivity I possess!
This is the work of an experienced, confident writer, an author comfortable in her own skin. The narrative flows easily. The characters are defined and plot friendly. You warm to Nell right from the start. The historical accounts and journals are fascinating, more fact than fiction I think but they read as if they are from genuine documents. Very clever. The plot is tight and well constructed. A palpable atmosphere is created throughout. If this genre is your bag I think you will enjoy this story. And if you do you will be pleased to know that the protagonists feature in five other ghost stories by this writer. Ms Rayne, also writes supernatural thrillers under the name Frances Gordon.
So, objectively, I'll give this four stars. It might have made five but for some of the dialogue. Some of the exchanges between mother and daughter didn't quite work, they sounded contrived as did exchanges with some of the other characters.

I note that Sarah Rayne has also written some psychological thrillers. Given the competence with which this book is written I may just seek them out.

I'm starting to 'collect' a few "Madonna" stories now - The Bellini Madonna by Elizabeth Lowry, The Madonna of the Mountains by Elise Valmorbida but this one started the trend. 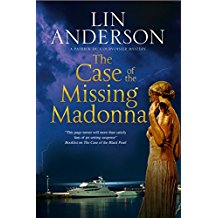 The Case of the Missing Madonna - Lin Anderson


This was a very satisfying read. It would seem that this is the second in a series of stories featuring the eminently charming Patrick du Courvoisier. Whilst little is lost from not having read the first book the frequent allusions to it acts as a constant dangling carrot.

Much of the action takes place in France, Cannes to be precise, and all that the name conjures in the imagination is here in abundance. There are inevitable comparisons with James Bond but it is a fast paced mystery that never loses momentum. There’s some interesting war time history which interested me enough to make me want to do some research on how much is evidential fact. There is plenty of excitement and action, Courvoisier is what I like to call a ‘Houdini Hero’, he gets into seemingly impossible situations and manages to extricate himself with aplomb. But he seldom seems to lose his humanity. If you are a lover of this genre you’d be hard pressed not to enjoy it. And does the guy get the girl? I’m not going to tell you, you will have to read it to find out.

I would have given this five stars but for the ending. The actual case of the missing madonna is solved satisfactorily with all ends tied up neatly and then when you think it’s all done and dusted there is another chapter that goes nowhere.  I thought I had a ‘duff’ copy with pages missing but I think the writer is attempting to whet the appetite for a future du Courvoisier mystery. To be honest I don’t think it’s necessary. For me I would happily seek out previous books in this series and await future ones.

One word of warning; I had to read this at meal times as the numerous and detailed digressions of Patrick into french gastronomy and wine, (boy, this guy can eat), played havoc with my salivary glands!
Posted by Bookphace at 07:12