Although I would describe myself as a fan of crime fiction I've only read a couple of Linwood Barclay's books.  It's not that I'm avoiding him it's just the way it is! But I loved this novel published in July 2013. 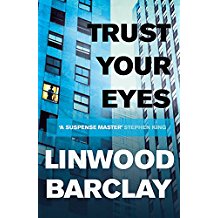 Hmmm, I think I might annoy a few people here; but if ever I were to find out that Linwood Barclay and Harlan Coben were the same person it wouldn’t surprise me. My response to their work is the same. Initially I am ambivalent towards them and seldom seek their work out. However when circumstances thrust their books my way I usually enjoy them immensely.

But I didn’t like Trust Your Eyes. I loved it!! I appreciated the character of Thomas although to me he presented as autistic. More Aspergers than schizophrenic but there were elements of both. And the relationship between Thomas and Ray wasn’t quite Rain Man but that thought came in my head and I was amused towards the latter stages of the book when Howard referenced that albeit in a less than affectionate manner. There were times, too, in respect of Thomas’s enlistment by the CIA when I was reminded of A Beautiful Mind.

The twists and turns of a thriller can often become so complex and interwoven that the reader becomes lost and the final dénouement is almost meaningless because the real clues are so elusive. But this plot developed its complexities as we followed each ‘blunder’ by the ‘baddies’ thus it was always accessible and possible to keep abreast of it without the sense that the writer was trying to be too clever or outwit us.

I really enjoyed the fact that my various suspicions regarding Thomas and Len Prentice were lurking as undercurrents throughout the narrative but there was nothing definitive to go on. And I have to say I did suspect Harry Peyton of some misdemeanour but I was way off the mark.

I found the majority of female characters to be one-dimensional and I can’t make up my mind whether that was intentional or not. It seemed as if they were more as integral plot tools than characters. Even Julie seemed to pop up only when she was needed for story development. On reflection that might also be true of the male characters apart from Ray and Thomas.

And that is probably, for me, the novel’s crowning achievement. It went beyond a good old crime thriller to an exploration of a foundered family relationship and the potential for a greater understanding between brothers. 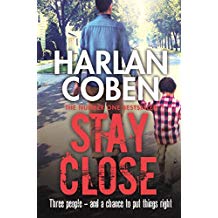 Unfairly I will acknowledge but I do see Linwood Barclay and my next author, Harlan Coben, in the same light. I think it's the complex plots and the time in my life that I was reading them. This novel was first published in March 2012 and I remembered being both pleased and surprised to receive a best selling writer to review. With reference to the penultimate paragraph of the review I don't think the film is completed yet.

As a keen reader of crime and thriller fiction you’d think a new Harlan Coben, and a hardback at that, to read and review would make me think it was my birthday, wouldn’t you? Tell the truth I was indifferent! I’ve only read one of his books previously and I found the twists and turns of the plot very clever but too complicated to make it a satisfying read. It didn’t resonate with me at all.
I’m delighted to say that I simply couldn’t put this book down. I loved it.
I never see the point in a review of summarising a very complex plot and running the risk of a spoiler for would be readers. A précis is easy enough to find on book covers in a bookshop and descriptions if you’re buying online. So I’m not going to.
This plot is complicated with twists and turns but it is accessible. It moves along at a cracking pace with an economy of language that sets just the right tone. There was a point where I realised who the murderer was but it was so close to the end that it didn’t matter.
The likeable characters were inherently likeable and the dislikeable characters were masterfully obnoxious and creepily sinister.
The dialogue at times bordered on film noire clichés, for example “It’s been too long, Cassie.’
In fact I found the whole novel cinematic in its conception, I could easily visualise the story as a film; the seedy dives of Atlantic City to the suburban domesticity of the leading female character. I even managed to ‘cast’ it as a film!! That led me to research any movie adaptations. I was quite surprised to learn that the only one of Coben’s books to be filmed was ‘Tell No One’ in 2006 but, you got it, Stay Close is to be the next!!! A very good choice.
And I loved the character-naming charitable donation program. I’m tempted to apply myself!!
So if any more Coben’s come my way I will read them with anticipation. 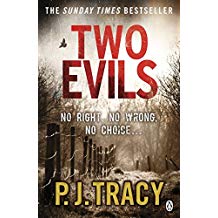 Finally in this trio a story from the  popular mother and daughter writing team. Sadly Mum, Patricia P.J. passed away in 2016 but her legacy lives on in these books. I've read several and always enjoyed them. This one was no exception. But it felt weird to be reviewing a new book from a series I already knew and loved.

I’m no stranger to P.J.Tracy, Grace MacBride and the Monkeywrench crew so I kind of knew what to expect with this and I wasn’t disappointed.  The book gets off to a rollicking start, two dead bodies already by page 6 and that’s just for starters.
It’s an easy read in many respects, undemanding and a paradoxical predictability for you don’t know what’s going to happen as the plot unfolds but you know the direction it's going to take. There will be a big part played by computers, Grace and the gang will be placed in situations of extreme danger and the cops and the FBI will try and sort things out. It’s a bit like the Famous Five for grown ups but the lashings aren’t ginger beer……..
I think that one of the dangers of two people writing the same book is you get double the plot complexity and characterisations so you have to stay on top of this to keep hold of the unravelling of exactly what’s going on. I don’t want this to be a spoiler so I’ll say no more.
It’s an easy, absorbing read; it doesn’t matter if you’re unfamiliar with this series of books. Whilst the characters have quirks aplenty they lack the depth of say a Tony Hill or a Harry Hole but if you enjoy a good ole crime yarn then you’ll enjoy this.

If you’re looking for more then go elsewhere, there’s the occasional attempt at social commentary but for me it never quite works. And there’s no need for it to this is a story that works and is simply a book to be enjoyed. End of.