Little did I know when I received this ARC from Real Readers in March 2013 that it would be the start of a protracted love for Elizabeth Fremantle's books. Queen's Gambit was the first of a trilogy and I went on to buy the next two as soon as they were published. I have a copy of the Poison Bed waiting on my TBR which only leaves The Girl in the Glass Tower and I'll have read all her books. There is something deeply satisfying about discovering a new writer and I can still remember the pleasure I felt from reading this book and the impatience with which I awaited the next book. All her books lie on my WTRA shelf - WTRA? Want To Read Again! 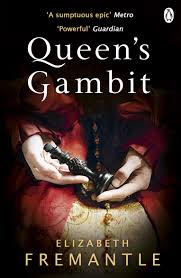 I was interested but not over excited when I received this from Real Readers. I thought it was just another piece of historical fiction featuring the ever popular Tudors. I’m an unashamed Philippa Gregory fan, I met the lady once and she is delightful. I’m ashamed to admit I didn’t think she could be matched. A little research shows that this novel is the first in an intended trilogy and in the current literary climate that can be a rewarding project (I’m thinking Stieg Larsson, The 50 Shades phenomenon, The Hunger Games…….) but is there a danger of an oversubscribed genre evolving here?
So I settled down to read this without any real expectations. Oh boy, how wrong could I have been? I thoroughly and completely enjoyed this book; I was entertained, educated and enthralled.  I knew little about Katherine Parr other than the kudos of her being the only one of Henry VIII’s wives to survive him relatively unscathed!!
What I particularly respect about this book was that although the research was immaculate it was not one of those stories where you felt that the author was reluctant to omit any of their investigation. So often a work of historical fiction screams ‘look at the research I’ve done, isn’t it extensive?’ And you are bombarded by detail that does not further the narrative in any way. This writer doesn't fall into that trap at all; everything is crucial and fundamental to the plot.
The characterisations are a delight, rarely have I come away from a work such as this feeling that I really know these people despite the fact that they lived a few centuries ago. Their human qualities dominate over their political functions, even Henry VIII. The atmospheres and emotion created were palpable, I rejoiced when the characters rejoiced, I cried when they cried and I was so fearful for their safety, especially Dot at the Tower.
I would suggest that this book is accessible to those people who deign to read historical fiction. There is an almost indefinable quality to this narrative which almost contemporises the historical with a natural and flowing style.