There is a reference to a star rating in this retro review. I loathe the practice!! But it is demanded by some so I cooperate. But I'm never happy with what I 'award'. In my early days of reviewing I gave every book I liked five stars in my naivety. Then when I read  a book that I absolutely loved I had nowhere to go! Lesson learned.  I dislike giving less than three stars. Just because I didn't enjoy the book didn't necessarily make it a bad one. A writer has out so much work into their book. Reading is so subjective. I'd rather my review try and look at the positives and negatives of a book from my perspective than let it hang on a star rating. 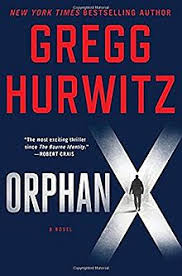 This is the second Gregg Hurwitz book I’ve read, the first being ‘You’re Next’ which I loved. So I was really excited to read this latest offering from a master of the thriller genre. And I was not disappointed. It’s a roller coaster, helter skelter of a read. The plot is complex and I’m still not sure I understood all of it and there are bits I want to re read. But it’s a bit Superman meets Pay It Forward. Evan Smoak is Nowhere Man who helps those in desperate need. And the story outlines his origins and how he came to be in this position. And how that position is in jeopardy. The details of technology, security, martial arts is faultless and one can only admire the mind that can conjure it all up.The violence is intense and may put some readers off. But if you read a thriller you know there’s a good chance it won’t be a fluffy stroll in the meadow. It’s full of action and intrigue, one of those stories where the reader is seldom allowed to relax, you find yourself looking over your own shoulder!

Okay, so why did I only give it four stars? Well, I found it overlong; there were parts where I could not put the book down, I was on the edge of my seat, which is fantastic but there were other bits that seemed almost padded out and there was no need, the book would have been good enough had those passages been more concise.  And Evan seems almost perfect in his superhuman exploits and that was too good to be true. Also there is already some hype surrounding the book with rumours of Bradley Cooper playing Evan Smoak in a film and it made me wonder if the book was written with a film in mind? Maybe that shouldn’t make a difference but somehow it does for me.  But this story is really not far off a five.