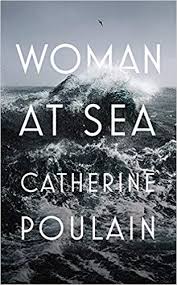 Lili is French and running away from something that is never really specified or defined save for a vague allusion towards the end of the book. Her flight from France sees her heading towards Alaska with a pre determined desire to fish those icy waters. The main thrust of the story has its base in Kodiak, Alaska, a fishing community specialising in cod, halibut and crab.

Classed as fiction it seemed to me that this was a roman de clef, very well written by Catherine Poulain and extremely well translated by Adriana Hunter. As far as I can tell! But I was puzzled as the French title is Le Grand Marin and my own elementary translation of that is - The Great Sailor! However the English title, Woman at Sea conveys more of the essence of the book than the French! But that of course is from an English perspective! To become hung up on titles is to do a disservice to the book.

A deceptively slender volume the writing within is strong, visceral almost. The descriptions of the actual fishing are pretty tough to deal with if you’re someone who doesn’t eat fish and is distressed by how they die. So as a reader I underwent a strong test of my ability to be objective! Reader, I didn’t skip a single word!!

I thought this was an unusual story; on a number of levels. Not much actually happens! Or it does but within the confines of an almost repetitive sequence. Fishing and the maintenance of boats and an emphasis on physical endurance and the susceptibility of the human body. The social activities when not fishing!! And then the main thrust, I suppose, is Lili’s journey and development as a person. Perhaps her struggle to succeed as fisherman is a metaphor for a deeper intellectual and soulful development. There seems to be a parallel. As she becomes more proficient on the boats and the water her strength of character develops too and her ability to deal with the situations she finds herself in.

The portrayal of life in an Alaskan fishing town is convincing. You feel that if you were to be transported to the streets of Kodiak it would be exactly as described, the boats and the bars and the booze, the bleakness. You would be able to smell the cold and the rain and the fish smell that must pervade every street and alleyway. The darkness of Alaska broods almost unspoken and the long hours of sunlight are not really alluded too until their disappearance - this passage conveys it beautifully-

‘……Alaska. Constantly tipping from light into darkness. The two are always racing, chasing each other, always wanting to get the better of each other, and we tumble from the midnight sun to the endless night of winter.’

‘It rains for three days and suddenly feels like autumn - the fall, as they call it. What is it that falls? The leaves, the light … our own fall? The summer sun has burned our wings and we fall back to earth like Icarus.’

I think that’s probably my favourite passage in the book!

Having alluded to the possibility that Lili’s fishing is a metaphor allows me a neat switch to comment on the writing itself. On the back cover L’Obs offers an accolade that places the book as a ‘successor to Conrad and  Melville”. I thought it wasn’t extravagantly wordy enough for Melville, there’s a lot of short, sharp sentences. I didn’t find it quite dark enough for Conrad. However I did think it had more in common with Cheryl Strayed both descriptively and intellectually. I also thought there was more than a passing nod to Kerouac. Not merely because I see it as a roman de clef but there was a sense of spontaneous prose to it. Descriptions of travelling and travellers, the eclectic mix of people encountered, described ably, much like Jack Kerouac did. And like Jack’s ubiquitous apple pie and ice cream, Lili eats popcorn frequently !

Nestling surreptitiously within the narrative too are some clues as to the writer’s take on growing and becoming in Alaska.

’Why do people stop running for the sake of bars and dope and everything that’s bad for us?’

‘I don’t know, that’s just how it is. So we don’t die of boredom, I guess, or despair. And also there’s the beast in all of us. It needs calming. If you knock it out things are easier.’

The narrative is consistent and evenly paced. The characters are, by necessity, homogenous, mostly. That excludes Lili. The conclusion is open ended and if I’m honest a little unsatisfying. But it was never going to be a neat little story with a comfortable ending.

Huge thanks to Nudge Books for the opportunity to read this book for has it absorbed me totally.  And did I mention it's Ms. Poulain’s debut book!!