This was one of the first books I read on the dreaded Kindle. Only at the time I didn't know how much I would grow to loathe the device! I was blaming myself for struggling to read ebooks! However this book was only available in eformat and I was so politely asked by Real Readers if I would take it on that I couldn't say no. This was back in October 2014. 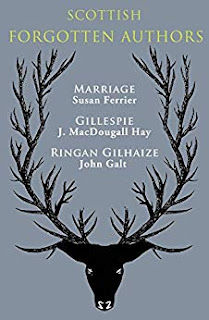 Forgotten no more, not by me anyway!! It was a joy to read these novels in all their Scottish diversity.

I loved the humour in this book along with the home truths, a poor man’s Jane Austen to be sure and too wordy overall. I think the same enjoyment could have been derived from a novel of reduced length but it remains a mystery why this book isn’t ‘up there’. Considering this is an eighteenth century novel the writing remains crisp and fresh. The characters jump out of the page at you and you love and hate them in equal measure, they are so clearly defined. There was much to be learnt about Scottish social life and the protocols of the time which I found revealing.

This was in complete contrast to Marriage a bleak tale of ruthless ambition. If there is any ‘feel good’ in the book I didn’t find it so if it is upliftment you are after avoid this book. And the Scottish dialect was often elusive to construe. I found it helped to read the book with a Scottish accent if that makes sense!!! But for all that it is a book that grips you and won’t release until you have read to the end. You carry on in the hope that there will be some salvation somewhere. But there isn’t. But I guess it is also a book of survival and prospering with your wits no matter whom you destroy in the process. In that sense it may even be seen as prophetic and contemporary! It’s a meaty book, well written and offers a grim picture of Calvinist Scotland that in some ways sends a shiver down your spine.

The final novel was my least favourite, maybe because I’m all ‘scottished’ out? I found it less accessible, more political, which seldom resonates positively with me. I think it is well written. I thought initially it was repetitive but as I progressed I realized it was a conscious device, kind of leitmotiv to emphasis the point. And I suppose the point is how belief and ideals can lead to fanaticism and even change a person’s behavior, which is food for thought for again it does pose a contemporary comparison with today’s fanaticisms.

As a suite of novels they are very diverse and are probably the tip of the iceberg when it comes to a wealth of Scottish classic fiction. Not to everyone’s taste I imagine. They were challenging reads with all the Scots dialect and idioms. The dictionary on my e reader couldn’t cope with many of the definitions but there were some lovely phrases ‘corpulent pandarus’ and I am still wondering what  ‘clishmaclavers’ might be!!

I am grateful to Real Readers for giving me the chance to read these novels as I can honestly say that I would never have selected them to read in a million years! But my literary education has been enhanced by the experience.
Posted by Bookphace at 08:00