First published in September 2014 this book seemed to meet with more approval from other reviewers than it did from myself! I seemed to focus more negatively back then for what ever reason. Perhaps a plus from posting these old reviews is that it shows how I may have progressed and developed as a reviewer for I don't think I am so negative now. I focus far more on the positives of a book. 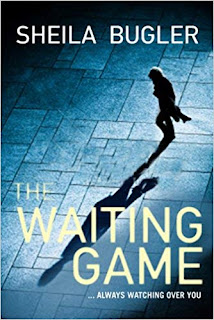 This was a waiting game for the reader in every sense. Oh how we had to wait to see ‘who dunnit’!! And we were served such a liberal diet of red herrings it was like being in a fast food fishmonger. And whilst this book would not win awards for being the best written crime novel it does have a plot that keeps you reading and wanting to know who did do it. Flaws a plenty the characters lack depth for the most part, they were hard to engage with  and not very likeable. It was very much as if they were there to further the plot and no more. I found Ellen fairly one-dimensional and I was surprised to learn that there are more Ellen Kelly stories. I may seek them out to see if I have been over hasty in my comments on the reading of just this one novel. The story zips along at a sparkling pace which I always enjoy but at the end as all started to become clear after the very exciting climax I felt the loose ends were not so much tied up as just laid over one another in a loose bow. I still have questions a plenty and clearly the final page indicates that DI Kelly will be back in both a personal and profession capacity.

It may seem that I have been unreasonably negative about this book. I did enjoy reading it as a page turner and I admire the plot construction. It was tight and seductive for the amateur sleuths who like to try and second guess the writer’s intent. I am one of those I heartily confess but I couldn’t properly second guess this and that always chalks up some brownie points and some respect from me.


Crime writing is such a competitive market these days that in order to survive it and stay in the running I think you’ve got to be very good indeed. It’s way too early to write Ms. Bugler (is it BUGler as in bug or BUGLER as in bugle?) off but if I were writing a report card I might say,’ shows promise but could do better’. And I really hope the do better wins…
Posted by Bookphace at 09:05