Number 10 in this series, Alice Clark Platt's debut novel was published in July 2015 and I was very enthusiastic about it! Earlier this year one of my Library Book choices was this lady's second novel. https://bookphace.blogspot.com/2018/09/the-taken-alice-clark-platts.html 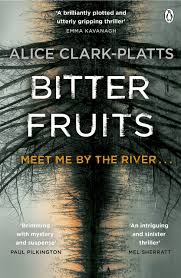 I love debut novels. They are such a lottery. They can be dire and finishing them can feel like wading through treacle. They can be okay and you sense some promise and defer ultimate judgement until the next one. Or they can completely blow you away.
I couldn't put this book down and I mean that literally. Everything was put on hold until I finished it.
I hesitate to use the word brilliant because it is overused and my response is subjective but for me this wasn't far short.
It’s a deceptive book and more substantial than it seems at first. And yet curiously there is a danger that this substance could be overlooked as the reader focuses purely on the crime aspect because it is so well done the attention doesn't stray.
The plot is tight, well constructed with a veritable shoal of red herrings to lure the reader into believing they have solved this crime. The characters are believable. There is no holding back when highlighting some of today’s contemporary issues; internet bullying so endemic nowadays, the morality of the media, or their lack of it, the dynamics of a police force pressured into delivering results unreasonably quickly to satisfy the bureaucrats and social commentators as if catching a murderer is so easy. And throughout the book how hard it is to be a young person in today’s world. I could go on the book has such a lot to offer.
There were imperfections; the story uses a dual narrative technique and there were a couple of inconsistencies, for example a character developed in the first narrative was suddenly mentioned in the second with no exposition. Some of the descriptive passages were so typical of a debut novel, that desire to demonstrate all at once the writer’s abilities. But I’m nit picking and this book  doesn't deserve it.


I’m very excited by this writer and I do hope there are more tales of this calibre to issue forth from her pen. Alice Clark-Platts? I am a fan.
Posted by Bookphace at 11:29