The eleventh retro review. I love Toibin's work. I've a copy of House Names on my TBR shelves begging to be read. This study of grief and bereavement was first published in January 2015 but as might be expected from the subject matter it's timeless. This review does contain spoilers. 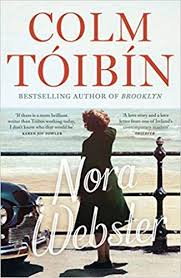 Having read Colm Tóibín ’s Brooklyn which I enjoyed immensely I was looking forward to this book from Penguin and Genes Reunited. And I think my familiarity with Tóibín’s style was an advantage.

I suppose this novel could be described as a study in grief which renders the intent as more simplistic than it actually is.

For anyone who has undergone the grief process it is tacit that we all deal with it differently and everyone’s way is valid. Grief doesn't come with an instruction manual.
This book is an unravelling both for Nora, as she learns to deal with her loss and us, the reader, as we learn to deal with Nora and understand where she’s at.

Initially I didn’t warm to Nora, the opening paragraphs dealing with her response to her constant flow of visitors struck me as cold. But as her circumstances unfolded my feelings changed.

Grief can make an individual selfish and I felt that many of Nora’s actions were maybe not characteristic of her in a ‘normal; state. The selling of the house in Cush seemed a rash action and probably more financial than emotional. We learn further on in the book that Nora has been unable to get rid of Maurice’s clothes but she did get rid of the house which must have held many memories. In a rational state of mind she might have consulted the children as to whether she should sell the house but grief and rationality are not good bedfellows.

My earlier point about how selfish grief can make us is detrimental for Conor and Donal. I felt myself go quite cold when I learnt that Nora had left them with Josie for such a long time when Maurice was ill and obviously dying. As much as he was Nora’s husband he was their father too and the experience of that loss and the temporary, geographical loss of their mother must have a profound effect on the boys so whilst Josie had a point in highlighting Nora’s absence I don't think it helped much after the event.

When people die young some take comfort from the fact that their beauty will never wither, other affirm that it is too young to die. It’s a point of view, no more, no less. Nora believes the former, Jim and Margaret the latter.

When one half of a partnership is no more the remaining party has to try and redefine themselves in a sense and I think this is the catalyst for Nora’s hair change and then the subsequent fear of what others may think. Historically in western culture mourning for women had a set period and a set costume and woe betide any who transgressed this. I think Nora is wondering whether she has followed the protocols for stereotypical grief and mourning. She experiences a similar crisis of decision when she considers the purchase of records and equipment.

When your present become distorted as grief can do, the past takes on a different emphasis, we are reminded of this when Nora reacquaints herself with the Gibneys and Francie Kavanagh.

I think that as one becomes accustomed to grief the self absorption starts to take its place within an awareness of others . On the beach holiday Nora begins to consider the effect that the tragic events have had upon her sons.

In a marriage or partnership one becomes accustomed to being part of that union. To stand alone again requires a deal of introspection and to reinvent one’s sense of self. I think Nora does this in many ways and shows a deal of sensitivity when a newly found assertion conflicts with the established assertion of another as in the incident with Francie cutting up the files. Similarly Nora’s attendance at the Union meeting. although possibly ill advised as she concluded afterwards it is another act of independence that required no consultation with anyone. And in a less obvious way Nora’s discovery of her singing potential is another individual and independent pursuit.It is similar for Donal and his photography, without his father he turns to something else to become absorbed in.

But being widowed young must be similar to having the rug pulled out from under you with no warning and however intrusive well intentioned people may have become to her she needs a rock to cling to and it is Josie who is that rock, possibly subconsciously but it is Josie to whom she entrusts her boys and Josie to whom she turns when she becomes unwell.

One of the interesting things about a novel like this is that we do not know Nora BEFORE Maurice died, we have no way of knowing the extent that the loss has changed her. But where the rest of the family seem keen to keep events secret from Nora indicates a level or protection, but is it for themselves or is it for Nora?

The closing stages of the book offer much food for thought and again it is down to individual belief and experience as to how we respond. Those who have strong, spiritual beliefs will believe that Maurice did come to visit her and it was this visit that allowed her to let go of his clothes and burn his letters for the belief that she actually saw him is evidential of life in spirit. On the other hand those who have no such belief will put it down to her medication, the pain, the insomnia. It's a personal thing and a clever device of the writer for we can only put our own interpretation on this.

How you see yourself through times of crisis compared to how others see you is very different. And peoples’ motives for association can be questionable. Some people genuinely felt sympathy for Nora, others probably felt a sense of duty, others, like Mrs. Lacey had another motive.

But I return to my opening  premise; we all deal with grief differently. This is one person’s story, very well written, the prose could almost be described as plain but the paradox is that it has a compelling richness to it.