This novel was first published in April 1999 and republished in November 2014. An interesting gap. I surmise it had something to do with the increase of cold calling in the 21st century. I remember it clearly as a book I just could not put down. I wonder if it would encourage the same momentum if I read it today? Any current readers of this book out there? I'd be interested in your responses? 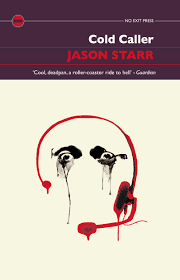 I couldn’t put this down; I simply had to know what happened and how things ended up.
Is that the mark of a good book? Maybe. It’s a compelling narrative very typical of its genre, a story that creates a spiral of unease as the protagonist hurtles into an abyss of, really, his own making. The same feeling you get from reading Patricia Highsmith. The sense that if one thing had happened slightly differently the whole story would have taken a different course. Fairly ordinary, mundane people get enmeshed in a web from which they cannot seem to extricate themselves. There are unexpected twists and turns especially at the end. There’s something very uncomfortable about the main character of a fiction being so lawless and unpleasant, such a liar and so immoral. And add to that the fact that the book is written in the first person so you know the character survives and you are imbibed with the need to read on. I thought the dialogues, especially between Bill and Julie, were overlong and didn’t add overall to the book. If it was a tool to indicate how unexceptional they both were then it worked but I wanted to move on with the story. And like the layers of an onion peeled away Bill was revealed to be a pretty worthless apology for a human being.


But this book is a must read for fans of noir fiction for it surely won’t disappoint. And whilst I won’t actively seek out Mr. Starr’s oeuvre if Real Readers, or anyone else for that matter, were to send me another I would read it with enthusiasm I’m sure.
Posted by Bookphace at 10:31