RETRO REVIEWING: I am in Blood - Joe Murphy

Number eight in these old reviews this book was published in April 2015. It is unusual in that I don't think I have anything good to say about it!! That is a rarity for me as even if I don't like a book I try to look for the positives. Bizarrely this review was a runner up in a Guardian review competition in 2015. My prize was a signed copy of David Mitchell's The Bone Clocks! 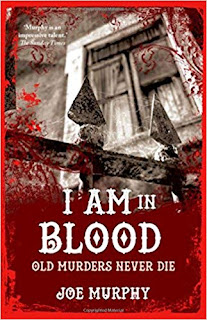 This writer was unfamiliar to me when I began reading this book from Real Readers and as I read I thought it was a debut novel. It read in that way a debut novelist often has of almost trying to over prove themselves with elaborate descriptions. So I was very surprised to find that Joe Murphy has a couple of other books under his belt. Sorry to say I won't be seeking them out.

I found this book unpleasant overall. Both factually and fictionally Jack the Ripper has been done to death (no pun intended)  and we are no nearer to finding his identity -  the cold case that will never grow warm. I am not sure whether we are supposed to think that the killer here really is the Ripper because the subsequent finding and killing of him lacks credence given the historical perspectives. That is a spoiler I guess and I don't normally do them but then to my mind can you spoil something that is already spoilt?

Overall I couldn't see the point of this story. The graphic descriptions of the mutilations added nothing to the narrative. None of the characters are particularly likeable, Maybe George is the exception.  Ultimately I deduce that the premise of the book is to suggest that an individual’s predisposition to becoming a serial killer is genetic. Not a pleasant thought. It is not an uplifting or entertaining book, it doesn't seek to draw out any significant truths or philosophies. Is it written to shock? To thrill? It did neither for me. But, much as I like crime, thrillers, historical fiction this wasn't a pleasant experience. But that is just my opinion. I find it disturbing that someone’s mind can come up with this kind of material.

I am rarely this harsh about a book and I will try to end with something positive. Ultimately I believe it to be quite a well written book. The title’s reference to Macbeth offers a clue maybe that there is some remorse somewhere within the book and from the writer maybe? And also, for me, reading a book  I don’t like makes me aware of just how many I do like!!