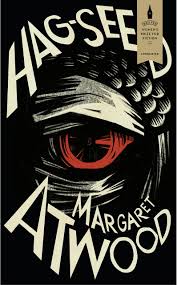 Penguin sent me a copy of Jo Nesbo’s Macbeth last year. I was pleased as I’m a Nesbo fan but I remember puzzling over the need or necessity for these prestigious writers to use someone else’s story to create one of their own. Are they all so short of new ideas?! I mean, did Shakespeare do such a bad job?!

For anyone interested I include a link to the Nesbo review.

But after having read the Nesbo I think I ‘got it’. I read a little more about the Hogarth Project, the need to keep Shakespeare fresh, the challenge, the honour, almost of tackling the Bard! So I was delighted to procure this copy of Margaret Atwood’s Shakespearean adventure from Nudge books. This is a modern interpretation of The Tempest. I love the play for its weirdness as opposed to the history plays, the tragedies and comedies. It’s a resourceful and creative rendition that uses a theatrical theme, a play within a play idea, to illustrate a delightful revenge story. How better to explore the themes of forgiveness and repentance than setting your tale in a prison?

‘Felix is at the top of his game as Artistic Director of the Makeshiweg Theatre Festival. His productions have amazed and confounded. Now he’s staging a Tempest like no other: not only will it boost his reputation, it will heal emotional wounds.

Or that was the plan. Instead, after an act of unforeseen treachery, Felix is living in exile in a backwoods hovel, haunted by memories of his beloved lost daughter, Miranda. And also brewing revenge.

After twelve years, revenge finally arrives in the shape of a theatre course at a nearby prison. Here, Felix and his inmate actors will put on his Tempest and snare the traitors who destroyed him. It’s magic! But will it remake Felix as his enemies fall?

Margaret Atwood’s novel take on Shakespeare’s play of enchantment, revenge and second chances leads us on an interactive, illusion-ridden journey filled with new surprises and wonders of its own.’

Something I learnt from the Jo Nesbo book was to put aside any preconceived expectations of how the writer might tackle the story. Forget the author almost? No, not quite. I couldn’t do that. This is Margaret Atwood after all!! And as might be expected  it was resplendent with the Atwood wit and subtlety.

The story was a delight and bordering on genius almost. For if you were to try and ascertain, stereotypically,  who in society would be least likely to be pro Shakespeare inmates of a correctional facility might be amongst your guesses. In so doing Margaret Atwood, in one fell swoop, has made it patently clear that Shakespeare is and should be accessible to all.

The main character, Felix, emerges as a better teacher than actor possibly for what he achieves with his motley crew of players is wonderful. From initially motivating them and guiding them in this unique performance of the Tempest to their conclusions and ideas about what happened to the characters after the play was extremely moving.

The revenge denouement is ingenious. I suppose it could be seen as a little farfetched but this is fiction it's a story  and The Tempest isn't a convincing bastion of reality!! It is possibly sugar coated if you’re looking for realism. From time to time you do ask if a group of criminals would behave as cooperatively as this. But I think the point is to offer a potential, the blueprint of a possibility. It’s one of the most uplifting prison stories I’ve ever read to be sure. And I wouldn’t mind betting that those unfamiliar with the Tempest might well seek out a copy or a performance after reading this book.

Which leads me neatly to considering how readers who are unfamiliar with the play do respond to the story compared to those who do know the play. If you know the story in the play you know what's going to happen in the book to a degree which possibly allows you to luxuriate in Ms.Atwood’s writing. She has wound the watch of her wit and struck!! But if not then the unfolding of the Tempest story with its diverse characters and its magical overtones will delight.

On a more metaphysical level the book explores notions of prisoners and imprisonment that exist beyond the confines of prison walls. The things that makes us all prisoners in some ways. Yet the book never strikes as being heavy. It’s possibly one of Atwood’s lighter treatments? But it never loses touch with either Shakespeare or the contemporary world in which it is set. I would see that as more than filling the brief for this series of books.

And of Margaret Atwood I say - “How beauteous mankind is! O brave new world, that has such people in it!”