Interestingly the hardback edition of this book was published in 2014 but the paperback in August of this year so this is maybe less of a retro review? However my thoughts on the novel were penned in 2014. 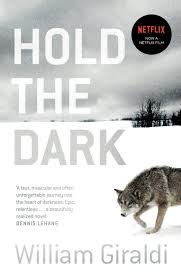 When I started to read this novel I thought Jack London had been reincarnated and I was back in the Klondike with White Fang. The mood and wildness of London’s landscapes are skilfully recreated in this brutal novel. You feel cold just reading the descriptions. But the protracted violence makes you feel colder still and moves you away from London’s ‘gentler’ depiction. But I think that London’s belief that man's actions are the main cause of the behavior of their animals is quite crucial to the intention of this novel in a curious juxtaposition where the animal’s actions cause the behaviour of Man where Man has totally misunderstood the animal. There is a suggestion that Vernon was a human wolf but the premise fails, as wolves are not gratuitously violent. I think that point is made by Core in the early stages of the novel. They kill to feed. Man, here, kills to feed? Feed what? His ego?
I did appreciate this novel greatly; setting aside the graphic violence, which was purposeful in terms of the plot, and character development, the writing was paradoxically elegant given the subject matter. And the final twist was magnificent. I never saw it coming and it left a whole new avenue of thought to pursue, Romulus and Remus?


Books like these can be challenging because you can simply read them at  face value, a story of one man, one coldly violent man or you can take your literary ice pick and chip away through the story’s veneer to the heart of it and emerge the richer. It is not a feelgood read by any means, if there is any upliftment, it is to delight in the skill and craft of this writer but it is a book worth reading.
Posted by Bookphace at 10:31