RETRO REVIEWING: The Girl You Left Behind - Jojo Moyes

The seventh in a series of reviews that have never seen the light of blog before today! This one was published in September 2012 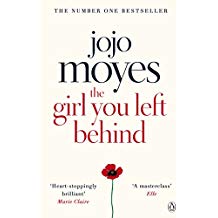 Often when you approach a writer for the first time it takes a chapter or two or even three or four to ‘get into’ the book. I’ve lost count of the times when I’ve had to really persevere with a book. It’s often been worthwhile and I’ve ultimately enjoyed the read. With this book though I was thoroughly ‘into it’ after a few paragraphs and I felt it boded well.

Although the setting is WW1 it felt like WW2 descriptively although I have no doubt Ms Moyes did her research thoroughly. I couldn’t lose this feeling at all throughout the novel. Maybe I've read too many holocaust books; fiction and non-fiction, for those were the images that intruded into my head. (I am sorry to say also I did keep getting mental pictures of the TV sitcom ‘Allo ‘Allo during some of the café sequences!) However that didn’t detract at all from my enjoyment of the tale.

We seem obsessed today with pigeon holing everything. So I pondered exactly what genre this book would fit into. Historic fiction? In part. My knowledge of WW1 France was certainly enhanced but the modern day sequences deny it a place wholly there. Romance? Certainly. The girl gets the guy in both timeframes, that was almost contrived, yet in a romantic novel, isn’t that what you want, what you yearn for? Chick lit? It dips its feet in there for sure but never totally stays there. Courtroom Drama? Yes to that too. And I think that’s why I liked as much as I did, purely because it can’t conveniently be genre stamped.

The characterisations were predictable for me in that it felt as if they were people I’d read about before but with different names and circumstances with slightly different details. But that isn’t intended as negative criticism, I quite enjoyed that. Similarly the narrative felt like several stories I’d read before fused into one. But I enjoyed the company of both Sophie and Liv and wished there was a bit more of Mo.

I think the book was well written overall. There is a danger that using more than one time frame can become confusing but I felt it worked seamlessly here. This book isn’t unique, it isn’t ground breaking, and I doubt it will win awards but it is a thoroughly enjoyable story to lose yourself in and immerse yourself in the tangled lives of others and end up with a satisfactory conclusion.