Published in November 2015 this was a little light reading for me as a cooperative gesture for a group I was reviewing for at that time since it wasn't typical of my preferred reading diet. As you will see if you read the review I surmised whether the writer would continue a series of diaries from further royal offspring. She didn't as far as I can tell. Probably for the best. 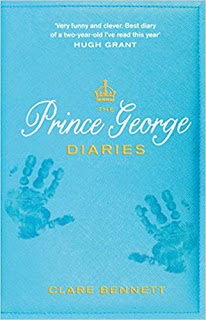 The book follows the life of Prince George, from his first birthday though to his second in a momentous year that sees the birth of his sister, in the form of a diary written by George. If you have firm pictures in your head of the some of the cute photos of little prince George I think this will entertain and amuse you. Compared to my usual ‘diet’ of books this was very much light reading and reminded me how valuable it is to read something that doesn’t require too much critical thinking. I was grateful for that.

But for me the anticipation of reading this book was greater than the actual event. Without a doubt there are some very funny, laugh out loud moments and I enjoyed them. But overall I felt that the writer couldn’t decide whether she was writing a parody or a satire. Granted, it is a fine line between the two. There were times when it seemed she held the Royal Family in contempt and sought to ridicule. They were caricatures caught up in the protocols and etiquette of a privileged lifestyle for which the author has no regard. Yet at other times it was as if she viewed them with genuine affection and reading the acknowledgements at the end of the book I think it is the latter. I hope so for otherwise this could be viewed as quite a cruel book.

There is no doubt that this format has enjoyed overwhelming success and it may appeal more to the younger readers amongst us? I remember being almost incapacitated with laughter when I first read the Diary of Adrian Mole. But when it came to Bridget Jones  I was incapacitated with an empathic understanding and resigned acknowledgment rather than laughter!! And with this book I wasn’t incapacitated by anything.

But I think people will enjoy this greatly and be entertained and amused, its full of clever observations and imagined personifications, some perhaps too exaggerated to really work comedically. And there are also one or two quite moving sentiments within this book.

It will be interesting to see whether Ms. Bennett continues the idea as a series or branches out with a companion diaries from Princess Charlotte!!