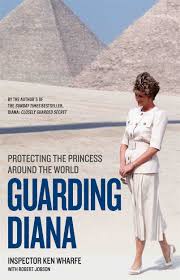 I took this book on because I have a friend who claims to have a spiritual connection with Princess Diana and I intend to pass it on! A spurious reason for reading and reviewing a book? Maybe. But it was also an opportunity to delve again into the world of non fiction which may redeem my rather superficial intent!

Overall the book is a straightforward account of the security issues surrounding Diana and her overseas trips; both vacations and official engagements. It also examined the relationship between ‘protector’ and ‘protectee’. I had the feeling that Wharfe was being honest about Diana the person rather than Diana the icon. It was absorbing enough as a read but I can’t see that it covers any new ground. It is interesting to consider whether Diana still attracts a wealth of interest so long after her passing? Wharfe appears to offer an unbiased view of all the key ‘players’ from Diana herself to other members of the Royal Family including Prince Charles

Two things I did I garner from the book was the relentless and insensitive machinations of the press, paparazzi and media. The book does offer as balanced a view as it can. One intrusive photographer claimed ‘press freedom and public interest’ as justification for the relentless hounding of the Princess and her children. I was surprised at how frequently ‘deals’ were struck with the media - a photoshoot in return for the photographers' exodus.

I found the most interesting part of the book was the final chapter where Wharfe questions the public outpouring of grief and a potential hypocrisy?

‘Though it may seem harsh or cynical I felt that there was something spurious about the mass mourning that followed her death and attended her funeral. True, most people loved her, but they had not known her. They loved the media image; they loved the glamour, the humanity, the sympathetic tears but they had little idea of the real Diana. Truly they loved her because of what they had read or seen or heard about her. What they were mourning was an image moulded by the media and by the Princess herself from her years in the public eye.’

Wharfe goes on to question the public’s vilification of the press who had fuelled their desire for their image of Diana.

I found myself moved again by the final pages detailing the funeral and wondering how the world would be had Diana lived and continued her uplifting humanitarian work.