This hit our shelves in October 2014. It looks like another of my minimalist reviews although it never seemed so at the time. I used to be scared of 'over writing' or 'over analysing' a book. It never occurred to me that maybe I was 'under' doing both!! 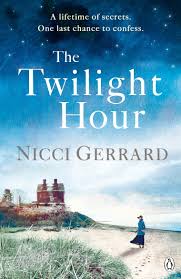 I’ve never got around to reading any Nicci Gerrard/Nicci French books. But after reading this new novel courtesy of Real Readers I realise it is my loss.

It’s a well written, well constructed novel which has a story, if that’s all you want from a book, but it also has much to say about memories and secrets, self sacrifice and responsibilities, consequences and how all these stir our minds as we age and creep closer to acknowledging our own mortality.

It’s not a new technique, an elderly protagonist reviewing a life that, as the title tells us, is in the twilight hour. The use of the younger confidante trying to make sense and cohesion of their own life confronted with parallels from the older person, is also not a new literary device. But it all works here and the competence of the writer projects it beyond a mere memoir novel.

The main characters are well defined. I sometimes found that Peter could have been developed more, it was almost as if there is another story for him where he will grow into the character he, intrinsically, is.

I found the closing chapter to be very moving and quite poignant with an insight into how a mind might work in its twilight hour but I suspect that may be an age thing and such philosophy may not resonate with younger readers.