The fifth book in this Retro Reviewing series, White Feathers was published in August 2014. 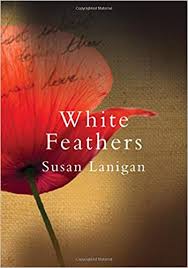 For me this was almost a perfect novel. I could hardly believe it was the writer’s debut. Firstly how topical given the current wave of First World War centenary events, research projects and commemorative ceremonies. Secondly it had a good, solid story of love and betrayal and points to make about war and maybe class and sexuality. Neither facet overshadowed the other; rather the two strands ran alongside each other in full complement. An historical novel, this author did not fall into that first novel trap of shoving every piece of research at you whether it was integral to the plot or not.
Thirdly it was a beautifully crafted book, it was economic without being sparse, and the characters were complete people. I’m going to say this, although I know many may ridicule me for doing so but I have to be honest. I was reminded of Pride and Prejudice. Mainly at the beginning of the book. Eva reminded of Elizabeth Bennett. She had sisters and friends who became like sisters, together with military interventions and scandals. Catherine and Roy Downey, however, are NOT Jane Austen’s Mr. And Mrs Bennett!!

And I said almost perfect for I didn’t find that perfection sustained right through to the end of the book. It was as if the writer suddenly thought, ‘Gosh, I better get this story finished!’ and I had the sense of everything being thrown in at the end. You could argue it was climactic and good plot tactics but given the control and flow of the rest of the novel it seemed to lose some cohesion. That is not to say that I didn’t continue to enjoy this book immensely and it is one of my favourite books of this year so far and I thank you, Real Readers, for giving me the opportunity.