Another, for me, quite negative review of a book. This one was first published in July 2012. Radmann went on to write another book, The Crack, in 2015 which has yet to attract any reviews, on Amazon at least. My research hasn't thrown up any more novels.  I feel bad when I feel I'm being negative but I can only be honest. I was hoping somehow to find a body of subsequent work that indicated some development and experience as a writer because Held Up was a debut work. Ah well....... 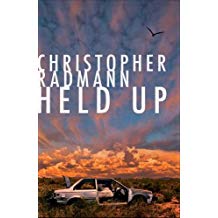 During these times of economic recession I would guess a publisher has to be pretty confident of publishing a new writer in order to get a decent return on the initial investment. And so I approached this novel with a trust that it would be a worthwhile read.

But I’m sorry to say that I didn’t like it. I’m not sure whether it was the subject matter or the writing style.

The story as a whole made me feel very uncomfortable but I think it was supposed to and there’s nothing wrong in that. However what I couldn’t get my head round was why this guy failed to think about his child until the hold up was over. I cannot think of a parent whose first thought wouldn’t be their child. This was unrealistic. I have no doubt that the author believed it would create a greater impact but for me it failed miserably and possibly compromised the integrity of the rest of the book.

I am not a fan of novels written in the present tense. I always feel that such a technique indicates that the writer is not sure enough of him/herself to commit. There is only one place in this novel where it worked for me and that is the description of Claire swimming and the recall of an adolescent memory, the present tense there seemed to reinforce the immediacy of their crisis and I liked the juxtaposition of swimming and tears. But that’s the only place.

I guess I learnt a lot about life in South Africa, the poverty, harshness, the anguish of a mother and her children all dying from AIDS and the challenges of simply surviving amidst such a severe regime.

The ‘happy ending’ is too contrived to work against the backdrop of brutality, heartbreak and violence. It simply doesn’t ring true. And with a novel like this a sense of reality within it is vital.

My heart goes out to anyone who has suffered like this. If this is a personal experience for Christopher Radman than I do applaud this work as an act of catharsis and I hope he feels better. But as a work of fiction or literature it doesn’t quite make it for me.
Posted by Bookphace at 10:59