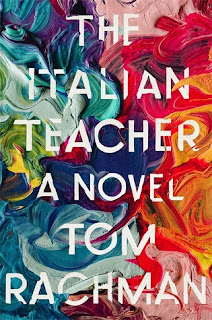 The synchronicity of all things; this last couple of months has seen no less than three art themed novels come my way - Elizabeth Lowry’s superb The Bellini Madonna, Maria Hummel’s gripping Still Lives and now this exquisite, Costa shortlisted, novel from Tom Rachman, The Italian Teacher.

The Italian Teacher of the title is Charlie ‘Pinch’ Bavinsky son of celebrated artist Bear Bavinsky, Bear is apparently successful and whose principled approach to his work includes the destruction of anything he isn’t happy with, a cavalier attitude almost to galleries and collectors and a disdain for critics. But he leaps off the page as a larger than life character, very aptly named Bear. Bear Bavinsky is an artist but I kept thinking that he is also an asshole! To his wives and his children. But is that because he is driven by a force that is more than himself? The creative streak can be a cruel mistress or master in some circumstances. In part Bear is aware for he says.’ What is art but decisions?”, and one of his wives acknowledges that ‘You need to be selfish as an artist.’ Well Bear is surely that.

And so is Bear the main character in the novel or is it his son? Poor Pinch, your heart bleeds for him. He so badly seeks the approval and affection of his mercurial father that it becomes his life’s work almost. The story examines the relationship between father and son and raises questions regarding nature and nurture. It’s a well observed piece of writing full of perception and understanding of what does or doesn’t drive people. Towards the end the summations of Bear and his life read like an actual biography, so much so, I almost googled him!!

The portrayal of creativity dominating domestic life and family is interesting. The ofttimes selfishness of creativity and the driving force it provokes in an individual will possibly resonate with ‘creators’.
Bear says, ’Not everyone is an artist. But for those of us that are, it’s war. …… Total war, or you’re dead from the start. There is a reward though. ….. We get to live forever.’

And the permanence of art and its potential endurance is a concept that is balanced by the impermanence and transience of life, in relationships and the ability to destroy. Bear’s proclivity to destroy his art when he isn’t happy with it seems to mirror a similar desire with his relationships and progeny although the destruction of these is not necessarily physical. But ‘Even if a man’s important, he doesn’t get to live by different rules.’, says Bird, one of Bear’s other children damaged by her self absorbed father.

And if the book is a story about a boy and his father it is also a tale of art across the decades. Does this book expose how fickle the art world can be? A character, journalist Connor Thomas and his ‘before and after’ attitude to the ‘new’ paintings of Bavinsky highlights this possibility. And Pinch’s actions, which I shall not divulge as it would be such a spoiler, contribute to this idea. As Victor Petros, a gallery owner, says ’Success in art is fifty percent timing, fifty per cent geography. The rest is talent.” A little harsh and cynical I fear but is there any truth in it?

Rachman’s novel seems to me to deal with notions of how painting as an art form seems to affect the individual in a different way from art as the written word. A painting hits you immediately and it’s emotional. Your head catches up with it later! Text hits your head first and your heart after. (Maybe both at the same time if it’s a good book?!). So a book about art, again, a good one anyway, is almost bound to be an explosion for the reader! The words become visual almost, you see them as well as read them if that makes sense. Maybe you have to actually read a book as textually visual as this one to grasp what I mean? Because it is quite an explosion!! Where brushstrokes can be paint heavy and bold, they can also be delicate and pastel light and if words can be seen in a similar vein then this book exemplifies that perfectly.

It’s a solid piece of writing, witty in places, moving in others, thought provoking throughout, the work of a talented author. My first Tom Rachman and even as I write this I can hear my TBR shelves shift themselves about to make more room………

My thanks to Ana Sampson McLaughlin at riverrun for a copy of this absorbing novel.
Posted by Bookphace at 16:16