This sixth in the series of retro reviews was first published in March 2015. 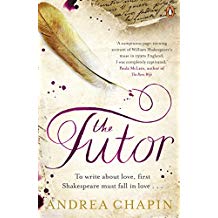 When I think of Shakespeare as the man not the playwright and poet I always think of the familiar Chandos portrait from the National Gallery. But when I read this book I think of the Joseph Fiennes portrayal from the film Shakespeare In Love. And I suppose that is quite fitting as both are fictional representations of the man whose true self remains the enigma and source of so much speculation. Often referred as the Bard I am wondering, from reading this book, whether that is the Elizabethan equivalent of a text abbreviation, i.e. b***ard for that is how I might describe his behaviour in this book!!

I did enjoy this novel; it owes as much to Jane Austen as it does to Shakespeare, methinks!! It does read as a ‘fan’ novel. In that the writer clearly reveres Shakespeare as a writer and I did wonder whether this story is the vicarious embodiment of a little fantasy she has about him, 50 Shades of Shakespeare! And so on one level I don't believe it is a novel to be taken seriously. It is what it is. But on another level that would be to dismiss the meticulous research that this writer has undertaken of the Elizabethan Age, socially and politically.

Katharine is a well drawn, substantial character, full of goodness without being over pious and prudish. However many of the other characters seem there as a function of the novel, they had  part to play to further the narrative but they seemed one dimensional. Ned wasn't int he book enough to see his character was developed but the potential was there.

And Shakespeare? This is one personnel view of how he might have been based on historical hearsay I suppose. And it made for an very pleasant read. I haven’t been been able to find any other books by Ms Chapin, maybe this is her ‘book that is in all of us’ and that somehow makes it all the sweeter to read.
Posted by Bookphace at 13:53