The second of my retro reviews, this book was first published in May 2014 . 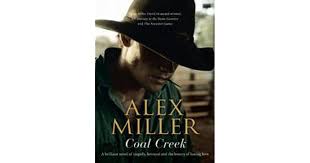 'When his father dies, Bobby Blue decides to leave the Mount Hay cattle station where they worked side by side and take a job in town as the new constable's offsider. Daniel, the constable, his wife Esme and their two girls, Irie and Miriam, are new to the western country and, struggling to understand its inhabitants, invite Bobby to stay in a hut on their property where he is educated alongside their daughters.
But there's a simmering tension, building quietly and strongly, beneath the overt goodwill. And when first Irie then Miriam become involved in a dispute that threatens violence, there's an abrupt and ruthless change in attitude from Daniel and Esme towards Bobby.
When tragedy strikes at Coal Creek the true nature of the perceived friendship is laid bare with consequences that will haunt Bobby for decades.'

I am not one to judge a book by its cover. In most cases I don’t even notice the cover, as I’m too eager to see what’s inside. But for some reason I did look at the cover of this novel sent to me by Real Readers and immediately Brokeback Mountain came into my head, the short story not the film. And whilst I am not offering a comparison between this writer and Annie Proulx there was a similar ambience cast throughout as I read this.

I enjoyed it very much. I found it a well-constructed novel with clearly defined characters. Initially I found the style of writing a little stilted until I came to realise that the narrative was the protagonist’s written account of events. It was a simple enough story but rendered complex by the acknowledgement of the intricacies of human emotion and behaviour. There was a very strong feeling of how different the events might have been if different courses of action had been taken. And the particular courses of actions that unfolded were mostly all fuelled by human emotion not necessarily understanding the true situation. Except for Bobby who seems extraordinarily perceptive and knowing about people, animals and their place within the natural order of things and what happens when that natural order is contaminated.

The ending did have a little of the ‘happy ever afters’ in it but as a reader it gave me a satisfactory conclusion to the book. It wasn’t sugar coated but, like the entire novel, stated as fact of what happened.

I can see this making a good movie if there’s anyone out there looking for some material with potential?