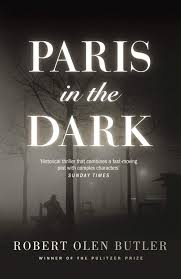 There was a part of me that thought I was being a bit arrogant posting a whole load of old reviews on my blog and calling the venture ‘retro reviewing’. My intention was innocent enough - to have all my reviews under one roof. I’m glad I did for the internet is a surprising place sometimes and after one posting of a trio of books I had read and reviewed I received a comment from a publicist offering me a copy of a further book in the series. I was thrilled. So thanks to Katherine Sunderland of Oldcastle Books for getting in touch and sending me a copy of Paris in the Dark.

A well drawn character in a book can jump out of the page at you sometimes. When that character is the protagonist from several books it’s almost like hanging out with an old friend. I was so pleased to reacquaint myself with Christopher Marlowe Cobb. I wanted to see how he’d been doing. I find him alive and well; grown up a bit, aged very slightly but wearing his maturity well. A little less impetuous than previously but still the James Bond of the 1900’s!!

So I knew what to expect when I dived into this book and I wasn’t disappointed, not for a second. Butler writes an intelligent, action packed story with just enough romance to maintain a balance between all the elements that make up this pacy Parisian spy tale.

It’s atmospheric, well researched so much so that you almost fail to appreciate the subtlety of the research in the descriptions of the streets, vehicles and their interiors and the atmosphere of a city in a war dominated country. I guess if you want to explore the themes more deeply you could find some political and cultural parallels  within our contemporary world but it’s okay if you don’t for the story is so keenly plotted, the narrative so well paced that you can gain much satisfaction from this Pulitzer prize winning writer.

It’s unashamed story telling with no defiance of structure and language conventions, a chronological narrative with a beginning, a middle and an end. A crescendo like climax that has you missing some words in your eagerness to find out what happens. And of course there are no punches pulled, there’s some violence but it makes a point. War is messy. Being a spy is a perilous occupation. I don’t believe the story would possess the credibility it does if Butler soft pedalled. (Actually I think there was maybe less violence than in some of the previous Cobb books!)

For those interested here is a link to my retro review of the previous Cobb stories.

And while we're at it how about a link to another Robert Olen Butler novel, Perfume River!


But I’m left wondering what Kit Cobb will get up to next? Over to you Robert Olen Butler!! Write me another?
Posted by Bookphace at 08:36