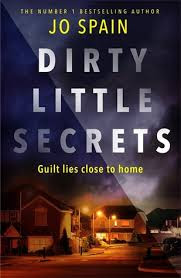 May I begin by quoting this wonderful line from the book, ‘Whenever I met somebody who told me they didn’t read, I used to smile and nod and deduct thirty points or so from their IQ.” Other than character development what does it have to do with the story as a whole? Very little!! But I absolutely love it and I will confess I’ve thought something similar on occasions!!

But to business. I read The Confession in 2017 and loved it. (Here’s a link to that review if you’ve the inclination to read it -

So I was delighted to grab a proof of Dirty Little Secrets from the wonderful folk at Quercus Books.

Anticipation can be a dubious emotion, for disappointment is potentially on the cards. Not here though. Another triumph for Jo Spain. It’s only when you’ve finished the book that you understand what a skilful, controlled and measured plotter Ms. Spain is, resisting all temptation to throw caution to the wind and expose these people and all their flaws in one fell blast.

The basic premise of the novel is not a new one; a small community, a crime, a gradual unfolding of the, sometimes harrowing, sometimes seedy, sometimes immoral, sometimes heartbreaking, pasts of the characters involved. But it’s how you deal with that premise that counts. As an author can you bring some originality to it? Well, Jo Spain can, and has, and how!

There are six neighbours with six secrets and six reasons to want Olive Collins dead. The novel is structurally very cleverly with third person narratives for all of the neighbours and the two police persons involved and a first person narrative for Olive which is so smart in directing the readers’ feelings about Olive and her neighbours.

Olive Collins is a wonderful character. We see her from her own perspective and the perspective of others, creating a quite contradictory picture. It raises absorbing considerations of how one’s own perspective of oneself differs from others. Do we see our own flaws? Does Olive? Wonderful fodder for reading groups to discuss here.

The atmosphere of a small, closed community, although they aren’t really a community in the real sense of the word, is well sustained. Like The Confession it’s an ‘onion’ story as layer after layer is peeled back before we can actually get to the truth of what happened. And each of these dysfunctional residents have their own defective demons to grapple with. No second guessing here, they maintain their facades until this tragic death and police suspicions chip away at their decaying fascias.

No character is extraneous and all are developed sufficiently for the reader to engage with although many are not instantly likeable. Interesting development throughout the book that changes the readers’ perceptions of some of the personnel. I hope that’s not a spoiler.

If you’re a Jo Spain fan there is nothing you won’t love about this story. It’ll grip you to the end. And what an end!! I will confess I did suspect something along those lines but I was unsure until the very last twist! It’s delicious! And if you’ve never read a Jo Spain book before this is as good a place as any to start. But be warned you’ll be seeking out more of her work before the end page of this one is closed.