Absolutely delighted to share with you an interview with Maria Hummel, author of Still Lives, the art thriller and Reese Witherspoon Book Club pick of 2018. Heartfelt thanks to Maria, and Lena Moses-Schmitt for facilitating the interview. 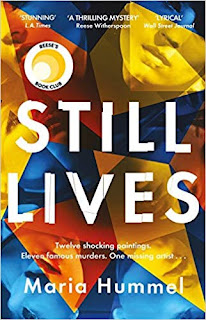 Before I read Still Lives you were unknown as a writer to me. The loss is all mine! Having now researched your works I am excited to read some more especially Motherland. Could you tell us a little about your journey as a writer?

Still Lives is my first mystery-thriller, but in other ways it builds on my prior work in fiction and poetry, particularly my novel Motherland. Studying with the poet Eavan Boland at Stanford opened the gates for me to look hard and deeply at the lives of women, especially in the contexts of stories that have been seen more often from a male perspective. In Motherland, I probe the “German question” of guilt and complicity by following a German stepmother who cares for three young children in early 1945. It’s loosely based on my father’s childhood in World War II.

Still Lives is a thriller. There are no shortage of works within the genre. What struck me about Still Lives was that in addition to it having all the hallmarks of a gripping thriller it also seemed you were digging below the surface and inviting your reader to explore ideas about art and life, art and relationships. Was this always an intention?

Absolutely. I think we’re at a wonderful moment in thriller and mystery writing where many authors are stretching the genre and asking it to mean more. And in Still Lives, I wanted to look into our fascination with female homicide victims, how some victims become celebrities of sorts while others are immediately forgotten. What makes a woman’s death juicy to us? Why can we and can’t we look away?

It pains me say it but sometimes the title of a book is almost irrelevant. In reality it often has little bearing upon the actual story. But nothing could be further from that with Still Lives!  I thought it was very clever. You start early in the book by drawing your readers to one interpretation of the title but then gradually as the story unfolds the wider meanings and word play become more apparent. Ingenious. Was the title the starting point of the book? Did it inform your plotting?

Thank you for noticing this! The title wasn’t the starting point, but it was certainly a touchstone for me. I am a poet as well as a novelist, so I am always fascinated by double meanings and word play. Funnily enough, I did not know that still lifes were historically considered a “feminine” art form until about halfway through writing the book, when I saw this information posted in a wall text at an art museum. Sometimes you get lucky like that—your subconscious picks up on something that you later consciously discover.

The book demonstrates a precise knowledge of art galleries, curating exhibitions and the contemporary US art scene in general. Is that a world you are familiar with or did you undertake massive research to create such an authentic environment in the book?

I worked at the Museum of Contemporary Art in Los Angeles for four years, and had a number of friends who were artists or worked at other L.A. institutions. My experiences in that world formed the foundation for creating the Rocque. I also had an inkling about the economics of an art career from contemporary artists’ stories, but I learned even more from Don Thompson’s revelatory book, The $12 Million Stuffed Shark.

Maggie clearly seems to experience some disillusionment with LA life. There is almost a stereotypical view of the city and Hollywood and a perceived glamour. Like New York, LA almost becomes an additional character in the books. What is your relationship with L.A.? Was it always your intention to set the book in the city of angels!?

Yes, it was my intention. No city in America is more important to our visual imagination. By this, I mean that the most prominent, most widespread and visible pictures we Americans create of ourselves are made by Hollywood. This is the reason that Kim Lord—the artist behind the Still Lives exhibition—chooses to set her show in L.A. As for Maggie, my narrator, her journey through L.A. is a journey through space and time, but it is also a psychological journey into her greatest fears and desires.

The actual idea of the Still Lives exhibition as an artistic concept is a chilling one in many respects. But it seems to me to feed some of the macabre fascination that many people have with murder. Does it interest you to explore the darker side of the human psyche?

I’m afraid of the darker side of the human psyche, actually. I never liked reading horror. I don’t even like most true crime. So it took many drafts to get the artwork right in this novel. I really had to go beyond my own comfort zone to accurately depict the lives and deaths of the homicide victims.

There were several references to F.Scott Fitzgerald in the book. It subliminally made me think of Gatsby and his extravagances hiding the person underneath. But I wondered if Fitzgerald is an influence?

I was fascinated by Fitzgerald’s time in L.A., a chapter of his life that people don’t often think about when they imagine the young, carefree Jazz Age guy and his lovely wife drinking to excess and jumping into fountains. Fitzgerald’s career had washed up when he moved to L.A., but he hoped that writing screenplays would give him another crack at fame. It did float him financially for a while, and he met a new love, Sheilah Graham, and started his last book. But he was also basically dying of alcoholism and had periods of monstrous behavior.

How do you approach your writing? By that I am wondering if you have a special place, special time, any special routines and rituals?

I used to write every day in the morning, before going anywhere, until I had kids. Now I write whenever and wherever I can. I do like rolling little spiky massage balls under my feet for long writing sessions. It keeps me alert.

I know that being an avid reader is almost compulsory for a writer so a question I always ask is if you can remember the first book you read that moved you to tears, if any?

I know I wept at Where the Red Fern Grows, which I probably read in fifth grade. Any sad animal story will reduce me to a puddle. I also cry every single time I read Oscar Wilde’s stories for children, “The Happy Prince” and “The Selfish Giant.” My kids have scrupulously learned to avoid these at bedtime.

And finally having been thrilled by this novel I am bound to ask when we can expect another new one! And is there anything you can tell us about it?

I am working a sequel to Still Lives, currently called Gallerina. It continues Maggie’s exploration into deaths in the art world, but the lens switches from the art museum to the art school. Thematically, I’m probing the often emotionally (and sometimes sexually) charged relationships between older artists and younger acolytes, and how they can lead to fame and disaster.
Posted by Bookphace at 08:24