An offering from Real Readers this 'Country of the Bad Wolfes', published in February 2015, was the first of Mr. Blake's Wolfe family novels. 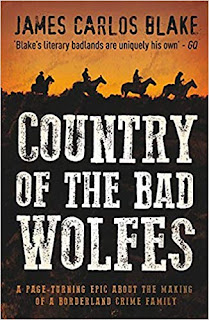 When I picked this book up and looked at the cover I was ready to deride the writer for his poor knowledge of plurals!! Then I understood that ‘Wolfes’ was a name NOT the animals.
This was a hearty and substantial read but not a quick one. And I enjoyed it immensely. Whilst reading the opening pages I actually considered googling the Wolfe family because it read like an historical reference book!! I soon realised they are fictional.
This is an action packed tale that doesn’t pretend to be anything other than a darn good yarn. Having said that though the amount of research is admirable and I’ve come away with a clearer picture of Mexico at the turn of the century.
It’s a very visual book, I found the descriptions allowed me to see clearly the characters and locations depicted. And the characters are accessible, no mean feat given how many of them are!
I got a bit confused with the genealogy as it seems all the mens’ names were prefixed with John so the inclusion of the family tree in each part of the book was very helpful and I referred to it often.
I suppose the amount of bloodshed might be cause concern to some people. If this were a film it would have a warning, ‘strong, frequent, bloody, violence’ But I guess these were bloody times. I was excited to read that this is the first of three books about the Wolfe family.


Thank you Real Readers, I found this a very satisfying read, entertaining.

And not long after in July 2015 the second instalment appeared! But I think this actually the third book!! I didn't receive the second or the fourth and its always on my mind to seek them out and compete the saga. One day maybe!! 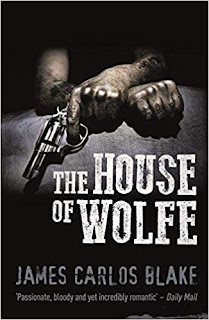 On one level I found this book incredibly disappointing and on another it was a gripping, absorbing kidnapping tale.

Disappointing because I approached it having read Country of the Bad Wolfes which I loved for its substance and history and I suppose I was expecting more of the same Wolfe family saga which I didn't get.

Instead I got a thrilling, edge of the seat story where the Wolfe involvement was almost incidental and the story would have made a darn good read with or without the Wolfes for the most part.

And so, if I can divorce myself from the initial expectation then I would have to say that I did enjoy this book very much.

Blake is a bold writer, fearless in his depiction of violence and convincing in its brutality. Not a work for the faint hearted but plenty of ingenuity and guts from the characters. An impeccably constructed human heist plan is enthralling in its precision and attention to detail. The kidnappers seem to have thought of everything and left nothing to chance. There is no sentiment in this book, no remorse. It cascades on a wave of ruthless ambition. And in the capable hands of Mr. Blake it doesn't falter for a second.

Fortunately it isn't a long book, I’m not sure I could have stood the pace if it had matched the length of the Country of the Bad Wolfes!! Of its genre it works well. It’s an entertaining if draining read!
Posted by Bookphace at 08:21