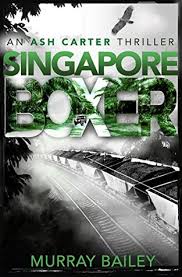 I’ll confess that often when I read I am ‘looking for literature’. This book isn’t literature. It has no pretension to be so. And it does me good to sit down and read a book like this. I had no expectations. I had a lovely personal inscription inside the front cover which warmed my heart when I opened it, although I knew nothing of the writer. So I had a look on Amazon. I saw that the Ash Carter series has a legion of loyal fans who were all giving good starred reviews. And thus I sat down contentedly to read this book. And it has done me the power of good!

Reading satisfies many different needs; intellectual, emotional and sometimes just the desire for escapism, some entertainment, something to take you out of your humdrum world and into a world you can enjoy vicariously through the precarious lives of others! Singapore Boxer is a book that satisfies that desire. That’s what Murray Bailey does and he does it damn well.

This is straightforward story telling at its best. It's an action packed adventure with an intelligent plot that is intricate enough to ensnare the reader but not so convoluted that the poor reader is lost. Its believable and factually stands up to scrutiny showing some conscientious research. The characters are substantial and real, especially Ash. The narrative is the work of an experienced writer who understands just how much to offer his audience. Scenes are set and described with the right amount of detail. Once you really get into the writer’s style you know that the details are salient to the plot overall without being obtrusive.

The story is well plotted with Ash, an ex military policeman, as an undercover man in Malaya seeking to solve a disappearance and a death and the source of some water poisoning that is threatening the health of local villagers. The tin mining industry seems to be at the heart of these anomalies. Nothing is quite as it seems, with the potential for corruption, deceit, and arguments flaring all over and some nail biting, life threatening sequences.

If pushed I’d say it has a lot of appeal for male readers with plenty of fist and gun action but not gratuitously violent. But there are some strong female characters too who redress the balance by injecting a humanitarian aspect to story.

This may sound paradoxical as on one hand It’s a book to keep you on your toes as you do need to keep up with plot development but it’s also an entertaining and relaxing book that isn’t asking you to look for the meaning of life.

Given that this is the third Ash Carter thriller I am wondering why it hasn’t already been snapped up for film or TV. Someone out there is missing a trick!

My thanks to Murray Bailey for sending me a copy of this book and for the inscription. I’m a sucker for a signed copy!!!
Posted by Bookphace at 07:55