Okay, so this is the very first online review I wrote so it seems fitting it should be the very last retro review I post! Now all my reviews are neatly collected on this blog which, as something of a completist, satisfies me. To all those people who have read these posts, thank you so much. I appreciate it more than you'll ever know.

I signed up to Real Readers sometime in 2010 and I didn't know what to expect, if anything. It was a while after I signed up that I received this book. I was delighted!! I almost couldn't believe it! I'd been sent a book! So I set to, to read it and review it. I did a lousy job!! I've always kept a record of my reading and jotted down notes about the books I'd read. But this was the first time since my student days thatI really had to think about what I was reading and what I wanted to say about it. From reading this review I'd like to believe I have developed as a reviewer. But I made such a mess of the brief for posting online. Basically Real Readers sent you the book, you read and reviewed it and posted your review in as many places as you could, pasting the links on the Real Readers website.  I was a novice and I had NO IDEA where to post my review.  I think I only posted it to Amazon in the end and I got that link wrong!! So I shrugged and thought, so be it. Doubt I'll ever hear from them again. Fair enough. Months went by and I forgot all about it. Then another book arrived. It was Emylia Hall's Book of Summers, a proof copy and I was ecstatic. The rest, as they say, is history. I researched all the places I could post reviews and did so with zeal. Real Readers reckoned at one point I was their most prolific reviewer! That made me very happy. However I was still a few years off from starting my own blog!!

So here it is, a review of Andrew Pepper's fourth Inspector Pyke book published in February 2010. 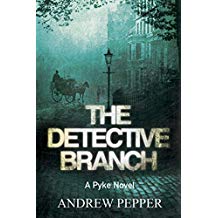 This was my first introduction to Inspector Pyke. I'm not saying it will definitely be my last but I won't rush to read another. There was plenty going on in the book; detailed descriptions of Victorian London in the early part. But I felt it was as if the writer was saying,'I've done all this research and I'm gonna include every last detail.'The plot developed as a complex web of intrigue with multi-faceted and spurious characters who were quite hard to like including Pyke himself.
Perhaps I read too much crime fiction but it was obvious as soon as there was mention of a policeman at the first crime scene that corruption was probably the main theme.And with the murder of a man of the cloth the Church had a major role too. It was a question of who, how and why.
I thought there was something of an homage to Dickens, Ebenezer Druitt would not have been out of place in a Dicken's yarn and images of Sikes and Nancy floated through my mind as I read of Culpepper and his violence.
I felt overall that the writer was trying too hard and the book was overlong. In fact it was the last quarter of the book where I felt the pace quickened and the quality of writing improved. I engaged more towards the end of the book after Pyke was imprisoned and I was keen to discover the final denouement.


Definitely I've read better crime fiction but equally I have read worse.
Posted by Bookphace at 08:54