I love DCI Daley so this retro review gets a post all to itself! This was the first I read although it is not the first written, it's the fourth but I quickly got myself up to speed with the others. There are a couple of the others reviewed on the blog. 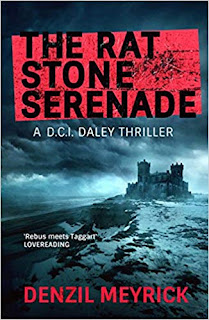 Thought I smelt a rat! This is the fourth D.C.I. Daley thriller, if you’ve read the previous three. But the first if, like me, you haven’t! And it may not be my last. It had me gripped from it’s early stages.
Deeply rooted within it’s Scottish location and customs the action takes part during the hogmanay period where the area is in the grip of an unusually fierce weather system. Snow is as much a character in the novel as all the heroes, villains and victims we encounter in its path. The actual location is the Kintyre peninsula and I apologise if I appear to know what I am talking about, I don’t, I’ve never been there. And I don’t want to. Not because I don’t believe that the natural beauty of the place would be breathtaking but because this book scared the bejesus out of me! And I can’t tell you why because that would spoil it.

There’s an ancient curse against a wealthy, privileged family and the police are required to do some protecting as some grisly events unfold that threaten just about everyone it seems.

The plot is complicated and I’m not sure I ever really grasped all the ins and outs of it. There is  a laudable Agatha Christie type attempt to unravel and disseminate towards the conclusion. I might have been persuaded to offer five stars if the implausibility of parts of the novel had been more defined and convincing. There is nothing wrong with implausibility if it can be rendered believable. at times it fell a little short of that for me.

Jim Daley seemed to have less of a presence than some of the other police characters which, if intentional, is very clever. There’s a touch of the Jimmy Perez about him but I fear that may be my succumbing to Scottish fictional detective stereotyping. My bad. But I warmed more to some of the other personnel.

And of the other characters? No one is quite who they seem. So it becomes unnerving when you think you have things sorted in your head and then it all get turned upside down. But isn’t that part of the pleasure of a good crime novel?

A palpable atmosphere is created throughout and the impenetrability of the weather makes you feel cold. A great read for a summer heatwave.