An Interview with Susan Elliot Wright

After I read The Flight of Cornelia Blackwood, after I had dried my tears, I found my head was brimming with questions. And Susan Elliot Wright was kind enough to grant me an interview where I was able to put those questions to her. I am very grateful. 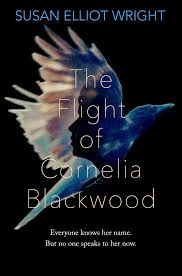 As a reader I found this a distressing book to read; that is not to say that I didn’t like it, I did but I felt myself emotionally in pieces afterwards. And if it did that to me what on earth did writing it do to you?! I am wondering how you managed to write it without breaking down frequently? Or maybe you did?

It was very hard to write in that respect, and I did find myself writing through tears on several occasions. I always try to put myself in my character’s shoes, so that it’s almost as though I’m going through what they’re going through, and so I feel what they feel.

I think writers who tackle subjects such as these are brave. I thank you for your courage in writing this book. I think fiction is a great vehicle to raise consciousness  to a wider readership for sensitive issues than a more turgid non fiction approach to the subject. But how did the idea of creating a fiction around postpartum psychosis occur to you?

Cornelia’s experience was something I’d explored in a short story I wrote a few years ago, and initially, I hadn’t set out to write about postpartum psychosis. I just knew I wanted to write about the early days and weeks of motherhood, and how terribly difficult they can be for some women. The psychosis sort of crept in on the back of that and took over the story. It was only when I started working on a novel about a woman who coveted another woman’s child that Cornelia started knocking on the door of my brain. “That woman is me,” she said. “Time to tell my story!”

I enjoyed the way you structured the story. The ‘now’ and ‘then’ time frames. Layer after layer of the events revealing the full extent of Leah’s unravelling. Was this always your intention to structure the story in this way ?

Yes, this was always the intention. I love reading dual narratives, but also I wanted to show how Cornelia/Leah’s experience changed her to the extent that she almost became a different person. I wanted to show the woman she was before all the tragedy – a young woman in love with her husband and dreaming of the children they’d have together, and the woman she became as a result of the tragedies – damaged, profoundly sad, and still desperate for a child to love.

The ending won’t leave me. Although you wrote it beautifully I wasn’t prepared for it and I had that inviolable sense that surely someone could have done something to avert it. But then that is the really the point of the story isn’t it? To show just how devastating this cruel condition is. And how it can go significantly unnoticed. But was this the ending you always had in mind? Was there ever a temptation to go for a ‘softer’ approach?

Yes, this was always the ending I had in mind, although I did try alternatives because I knew it was risky in that some people wouldn’t like it. I tried a number of different endings, but they felt contrived, a cop-out, and the last thing I want to do is insult the reader, so ultimately, I had to be true to Cornelia and her experiences. While it’s not a ‘happy’ ending, I didn’t feel it was an ‘unhappy’ one for Cornelia, who reaches a certain tranquility at the end.

A question I am hesitant to ask but I must and that is how much this book is based on your own personal experience? You touched on it briefly in the preface to the book. But I imagine that you had to do some extensive and careful research too? Could you tell us a little about that?

Cornelia had a much more difficult time than I did, but I did draw quite heavily on my own experience of early motherhood while writing this book (and in the original short story). It was only when I started researching post-natal psychosis and was talking to a perinatal psychiatrist about my own experience, that it became clear that I’d probably had a mild form of it myself, although of course it was never diagnosed (I was diagnosed with postnatal depression much later, but that wasn’t the same thing).The psychiatrist I talked to gave me the name of a wonderful organisation called Action on Postpartum Psychosis, which helped enormously with my research, in particular, I was able to read lot of personal accounts which I found incredibly useful.  https://www.app-network.org/what-is-pp/personal-experiences/

I loved the metaphor of the crows and found it wonderfully sustained through out the book. How did that particular image come to fruition?

For me, crows will forever be associated with early motherhood, because there were lots of them in my back garden when I was a new mum, and I remember standing at the window, watching them as I jiggled a crying baby in my arms. Crows work well as a metaphor because of all the superstition surrounding them – the idea that they are harbingers of death and so on. Cornelia’s relationship with them is ambiguous – she sees them alternately as enemies and as friends. I felt this reflected not only her unsettled state of mind, but also that feeling a new mum sometimes has that the people who love her are also being critical of her mothering.

When I read a book like this I fervently hope for it to reach as many people as possible to educate but also to give some hope to the silent sufferers. Did you have such an aim when you started to write the book?

I always wanted to raise awareness about the difficulties some women suffer in the early days of motherhood, but when the psychosis strand started to emerge, I knew this was something that needed to be talked about. There’s still a taboo around maternal mental health problems, and I think it would be healthier if we talked a lot more about postnatal depression and post-natal psychosis. It’s my hope that, after reading this book, someone might be a little more likely to recognise a developing mental health problem, either in themselves, or in another new mum.

How do you approach your writing? By that I am wondering if you have a special place, special time, any special routines and rituals?

Like many authors, I am a terrible procrastinator and I’m easily distracted! I have a lovely study at home to work in, but often end up doing another load of laundry, sorting out household admin or faffing about on social media. So it’s often after lunch by the time I knuckle down to actual writing. I usually work much better away from home – the library is great for writing, or coffee shops (when I can afford it!) The background hum of the coffee machine and other people chatting gives me the sense of being in a little writing cocoon. Without the distractions of home, I can focus completely and totally on my story world – that’s when I really enjoy writing!

I know that being an avid reader is almost compulsory for a writer so a question I always ask is if you can remember the first book you read that moved you to tears, if any?

To be honest, it doesn’t take much to have me in tears – as a child, I used to cry watching Tom and Jerry because the cat always got hurt, and Bambi nearly finished me! As an adult, I remember sobbing over two books I read at about the same time: Jude the obscure, by Thomas Hardy, and The Awakening, by Kate Chopin. Beautiful, and so sad.

And finally having been moved by this novel so much I am bound to ask when we can expect another new one! And is there anything you can tell us about it?

Cornelia Blackwood took quite a lot out of me, and after delivering it, I found myself unable to write for a quite a long time, which was horrible. I’m only now tentatively starting work on a new idea. It’s very raw at the moment and I have no idea if it’ll come to fruition, but it’s about a woman who finds herself in an abusive relationship. I can’t really say more than that yet because I’m discovering what happens as I go along!

My thanks to Susan for such a frank and informative interview. The Flight of Cornelia Blackwood was published on 21st February by Simon and Schuster.
Posted by Bookphace at 08:38