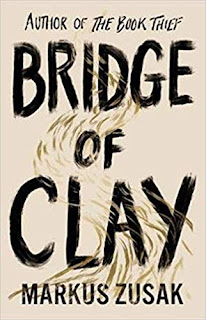 I am a little late to the party on this one but up to a point I was scared to read it! I invested so much in the Book Thief emotionally that the dichotomy was that Bridge of Clay wouldn’t be as good, or it would be better!! In actual fact it was neither!! But more of that later.

‘Tough act to follow’ is a well used cliche these days but I do wonder when you’ve been the creator of a phenomenally successful book how you go about following it up. I read The Book Thief, loved it. In fact I chose it as my book when I was a distributor on World Book Night a few years ago. On the strength of that I read The Messenger (US I Am The Messenger) and found it to be a very different book. Not unenjoyable but hinting of Zusak’s potential diversity. I found `Bridge of Clay to have more in common with ‘The Book Thief, stylistically, as if Zusak has found a voice he’s comfortable with.

Bridge of Clay is a lengthy tome and my feeling is that it didn’t need to be this long to get the points across. But there is something about Zusak’s style and narrative that draws you along. Simply, it’s a story abut a family dealing with bereavements and broken hearts and how a collection of brothers stand together and basically raise themselves in the absence of parental supervision. It’s been done before and many of the emotions contained within the story are those we are all too familiar with. But of course everybody deals with these situations very differently and in this book of Zusak’s we learn how the five Dunbar boys deal with the tragic situation they are in.

One of Zusak’s strengths is the ability to characterise and having found an agreeable plateau in The Book Thief he extends that here in the characters we encounter. He doesn't hurry the depictions of his creations, as a reader you are given every opportunity to get to know the people within these covers. Even when they are a little enigmatic or ambiguous you have enough detail to understand why. I would suggest Zusak understands people and some of their motivations. He understands the possession thing and how that links with the essence of a person and can endure even when they are gone. Those aspects are subtly poignant and ably depicted in this book.

The titular bridge is both symbolic and concrete (no pun intended), quite a powerful symbol and it works here within the limits of building bridges cliches.  There is a sense of the sometime existential, sometime metaphoric with Zusak perhaps sitting on the fence without preference. Again death is a theme that occupies Zusak and I would think there are few who won’t be moved more than once whilst reading this. But I did get a sense of veering very slightly towards the edge of sentiment.

There’s a quirkiness and off kilter poetic style to some of the phrasing and sentence construction that fuses an almost classic style with the idiomatic that is linguistically delightful.

‘He stood above him by the couch, the morning still dark.
His hands were healed, from blisters to scars.
‘I’ll be away a while.’
The Murderer woke.
‘I’ll be back though.’

‘What was the real happiness between them?
What was the truth?
The true one?
Let’s start with the artwork.’

I didn’t feel it was ‘better’ than the Book Thief. It’s a different book with some enduring themes and different dynamics and so a contrasting emotional response is required of the reader. But equally I didn’t feel it was ‘worse’. I suppose I expected, wanted even, to be wowed. Don’t get me wrong I did enjoy the book enormously and I won’t hesitate to recommend it. But, for me anyway, it’s an example of how one globally successful book can spawn, perhaps unreasonable, expectations for the next.

Ultimately though, like The Book Thief, Bridge of Clay is about love. There’s no more to be said.
Posted by Bookphace at 08:56