Another trio today of thrillery, crimey flavoured tales. The first, with a political bias, from Peter Murphy published in February 2014. 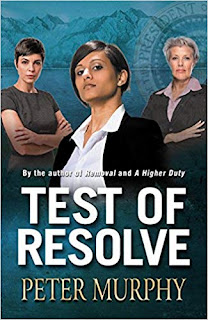 Politics, religion (most of the world’s ills now and throughout history caused by these disciplines?) and a liberal sprinkling of Bible belt homophobia and you’ve a recipe for an absorbing thriller.
I enjoyed this novel for its simplicity and if that sounds like a paradox, given that it is a political thriller, it isn’t. Plot wise it’s a kidnapping for political reasons, demands are given, they have to be met or circumvented, and strategies are discussed to achieve a fortuitous end. It’s straightforward. There are no attempts to be overly complex or ‘clever clever’ with intricacies to impress and befuddle, no red herrings thrust in our path,
And so the novel reaches many little peaks but no spiralling crescendos (okay, maybe one) to shock and confound.
But this is also a novel about people; their characters and relationships. their integrities and resolves (duh,test of resolve). So, as a reader I engage with the characters more than the plot. I found myself considering what I would do in these situations. That doesn’t always happen with a thriller. You read the chain of events and dénouement with a detachment, here I almost was the characters.

I found this novel refreshing and readable. So thank you again Real Readers for allowing me to spend my time so profitably.

The second, from Tim Weaver, published in August 2013, was one of the those books that I'm glad I stuck with despite my early frustrations. Although having said that it is almost unheard of for me to give up on a book. 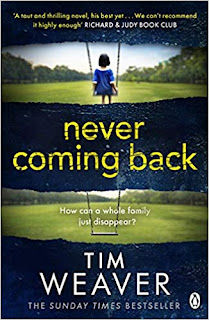 I must confess that when I started this latest Real Readers offering I started to get quite frustrated. There were too many time frame changes, too many different sets of characters and locations, the changes from first to third person, the change to italics, (was that because it was more important?) - I was ready to damn the book critically!!
Boy, how wrong could I be? Once I got used to that style I couldn’t put the book down.
David Raker is unfamiliar to me as a character but I think I like him enough to read some more (apparently this is the fourth). The other characters had enough depth to elicit an emotion from me towards them. They were people rather than characters with a narrative function.
The violence was chilling but the tension was supreme all the way through to the final dénouement. I felt almost scared in places. The writing was tight yet flowing. The clues were there some were obvious, others not so which is where you get such a buzz from a thriller. When you can’t second-guess you know you have a good writer.
I don’t do spoilers but I did suspect the genesis of the cover up and I found the ending sentimental I try to avoid spoilers so I can’t specify why but for me it was unrealistic and there was a point where it was predictable. However it would appeal to the ‘happy enders’ if they read that far? It was almost as if someone else had written the final few pages.
But there is no such thing as perfection and I happily recommend this book to thriller lovers.
I was thoroughly thrilled!!

The mystery here is how this book slipped through my blogging net since it was published and read after I had begun my blog. Published in January 2017 it is part one of a series. I have a couple more Kernicks on my TBR shelves and I'm sure I will enjoy them as much as I did this one. 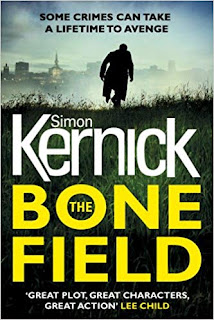 No, no, no, no, no, no. How dare you write this book, Simon Kernick? It really shouldn’t be allowed. There should be a law against it. There was I, minding my own business, thinking to myself that I’ve never read a book by Simon Kernick and that ought to change. Now look what’s happened? In one fell swoop I have been ensnared by another crime writer. And I cannot escape. I now have to seek out and find every book Simon Kernick has ever written and devour them! All.

This book was a joy to read. It’s all a good thriller should be. Edge of the seat stuff, a white knuckle ride of a read. Exquisitely paced, unbelievably gripping, there is no let up in the action and the unfolding of the plot. Yep, there’s some grisly bits and some uncomfortable passages but it seldom borders on the gratuitous and just makes you, along with the protagonists, all the more desirous of the perpetrator’s demise.

My understanding is that this book features two characters from previous Kernick novels; DI Ray Mason and PI Tina Boyd, previously with the Met, ( I will read them!), and brings them together in this book and hopefully more in the future. The ending certainly suggests that. A brilliant idea and I’m not sure it has been done before.

The story opens with the disappearance of a girl in Thailand in 1990. A crime never solved. But this is more than a cold case thriller. The missing girl is just part of  the jigsaw puzzle of corruption and violence. It’s never been my style to offer lengthy summaries or précis of books. And I think it’s a tricky thing to do with a crime novel because there is danger of giving too much away, not spoilers exactly but taking a little of the impact away by offering an expectation.

I will say that the characters are believable. It has almost become stereotypical in today’s crime writing to offer police persons and detectives with flawed and quirky personalities. Ray Mason doesn’t disappoint in that department. A penchant for danger and often in the wrong place at the wrong time he seems curiously aware of these shortcomings but still manages to place himself in perilous situations.Tina Boyd is the perfect female foil for Mason. An atypical private eye she seems to be made of rubber as she bounces her way out of some hazardous states.

Many of the other characters are functional to the plot, not unbelievable, but we are not required to engage with them as we are Mason and Boyd. The nasties are suitably evil and we wish them as much harm as they inflict on others.

I commend this book to you. If you are already a Simon Kernick fan you may have a certain amount of contempt for me because you must already know how good a writer he is. But if like me you’ve never read his work before I can only suggest you do. But be warned it may place unexpected demands on your time.
Posted by Bookphace at 07:47