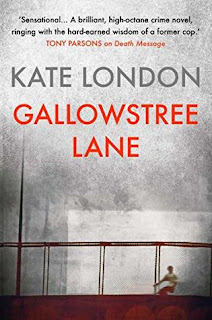 Another Kate to add to my list of ‘Writers I like Called Kate’! But Gallowstree Lane had me fooled initially because for some inexplicable reason the title conjured an image in my mind of Victorian London. I was right about London but that’s where it ended. For nothing could be further from the reality. This is very much a book of our times, raw, contemporary dealing, with similar incidents that are probably happening as I write. The author does insist at the end of the book that this is a work of fiction but given her previous career in the police I feel fairly sure that experience has fuelled her imagination significantly.

A little research tells me that this is not the first book featuring the two female policewomen and indeed reading it infers a dynamic between the two that suggests a history. Nevertheless this book can be enjoyed as a standalone. It’s an extremely authentic and gripping police procedural where gangs, organised and knife crime merge and blur posing infinite demands on the overburdened shoulders of our main police protagonists.

There is some attempt at the psychology of crime in the character of Ryan, maybe even some hints of how radicalisation can occur in the vulnerable. You pause to wonder how the cycle can be broken. But there’s no attempt to deflect from the hard truths and devastation that crime can produce. Plenty of action, plenty to think about and you need to stay on your toes to follow the thinking and the moral and immoral motivations of the police as well as the criminal factions!

It’s highly topical book no less relevant because it’s fiction There’s a sense of inevitability running through it. It isn’t a feel good read, nor should it be. But it’s a gripping read, you’ll be reluctant to put it down.

Thanks to Readers’ First for a copy.
Posted by Bookphace at 08:21