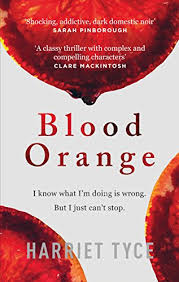 Oh ho, Ms. Harriet Tyce! So, you thought you’d write a debut novel did you? A psychological thriller, no less, eh? S’pose you thought it would be clever to come up with an absolute page turner that has a plot twistier than a Curly Wurly? And then throw in a cast of characters as flawed as plastic saucepans?
Damn right!!
You've nailed it!!

Just when you think that maybe this genre has had its day, it’s as gone as the girl who’s missed the train someone comes along with a psychological thriller that has everyone sitting up and taking notice again. And that someone is Harriet Tyce. Blood Orange is as taut and tight a thriller as you’re likely to read. Sure you can argue that this genre is formulaic to a degree but like many recipes the same ingredients crop up again and again but the end result is delicious. Bake me a cake without the flour, the fat and the sugar, write me a psychological thriller without the flawed narrator, the twists and the suspense. The trick is to put the ingredients all together in the correct proportions and don’t over bake. That’s what Harriet Tyce has done here. And in the tradition of the Great British Bake Off she has created a showstopper! It's enTycing!

Alison is a lawyer with an ostensibly promising career. The author's legal background is put to good use here. I was reminded briefly of that nineties BBC series This Life because of the legal theme and what can happen in Chambers out of hours, but also the gifted young lawyer with the drink problem. She has a husband and a child. And she’s just got hold of her first murder case. I am loathe to divulge much more than that.

The meat of the novel explores attraction and control, perfidy and jealousy not just in the main characters but some of the lesser characters too. These characters are all defined but none are especially likeable. That seems to be another ingredient of this genre. It’s as if the writer doesn’t want the reader to engage emotionally with these people, just enough but not too much. Maybe the need to remain objective adds to the tension. There is perhaps one exception in this novel, someone I felt desperately sad for. But there is no shortage of emotional response for the reader. You'll get angry, you'll get sad, you might even laugh and you will surely smile in delight that a book like this has come your way.

The title is good, sharp and visual. The motif of the orange is well sustained. And it’s a paradox for it says everything about the book yet tells you nothing!! Until you've read it of course!

It is a well paced narrative that demands you keep reading. There’s something about a debut novel. Sometimes you get a sense that an author is tentative, throwing too many words together for fear of missing something or not offering their reader enough and losing the story a little. And then you get a writer like this who seems fearless. It isn’t that the reader is unimportant it is that the author’s concern initially is for the story. Yet it’s the reader who reaps the benefits! It’s a bold book.

My thanks to Georgina Moore at Headline Books for a proof copy and my thanks to Harriet Tyce who's presented us with a real humdinger of a tale!