From an evening of new books, a book launch breakfast to an online buddy read you’d think those quirky Quercus guys cannot possibly come up with anything new. But they have. And it shall be called ‘Tantalise a Book Blogger’ !

Quite unexpectedly through my letter box this week I received a slim, pamphlet type publication with a postcard, called ‘Finding Dorothy’. It would appear to be the first two chapters in a forthcoming book by Elizabeth Letts about L.Frank Baum’s widow Maud and THAT movie! 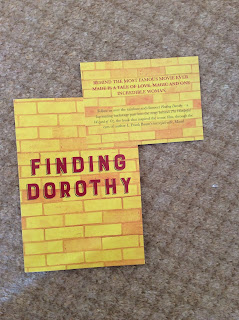 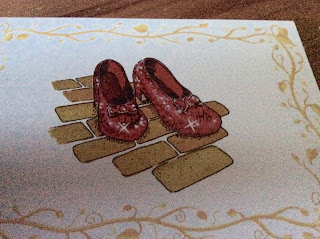 It would have been rude not to do so therefore I read the pamphlet. Thank you very much, Quercus, for now I want to read the rest of the book and I want to read it now!!

For in the first chapter the scene is set for a very determined lady to champion the integrity and intent of her beloved husband’s ‘modern’ (1900?) fairy tale. Dammit I know this is a spoiler but I can’t help it. There’s a sequence towards the end of chapter two where Maud witnesses one of Judy Garland’s first attempts at singing ‘Over the Rainbow’ . Hairs. Back. Of. Neck. And the redoubtable Maud offers her opinion as to the treatment of the song. And Judy listens. And lets her voice soar.

‘But that soaring voice …somehow this girl, a stranger to Maud, had conveyed exactly what it felt like to be just spreading her wings, waiting to fly. Even now, in her eighth decade, Maud had not forgotten this complicated emotion: the desire to escape, to get away, to grow up - the fate of every girl.
Every girl except Dorothy.’


Two chapters of intrigue. Two chapters about one of the most iconic movies of all time. Two chapters? Please. I mean you ARE going to send me the real thing aren't you? I mean there has to be a crock of gold at the end of the rainbow, right?
Posted by Bookphace at 08:37